REVEALED: Filed court processes proves Chima Anyaso lied that he moved on with his business after losing elections.

He has actually been running from court to INEC for two years. - By Ndidiamaka NnamNjoku Ph.D

One of the anti-democratic signs in a system is when the will of the people is not respected especially by those positioning to lead.

A true democrat accepts the decision of the people and goes back to work like Abraham Lincoln to be accepted in the future even if it takes seven or more rounds of tenures. The president of America was a perfect example of this.

While most democratic climes have embraced this philosophy in advancing their democracy which was recently copied by President Jonathan in 2015, others have allowed self-will to be stronger than the will of the people whose position through their actions have been consistently questioned.

If you lose a game and stand around the soccer field for two years, it is either you are dumb or have a mental problem deserving a psychological analysis. It could be a complex unknown to medicine . To leave the scene after losing is the spirit of sportsmanship which helps you get over your failure and thereafter relaunch yourself with a better vigour.

It is witchcraft to stand around wishing and waiting for your opponent to fall. Witches don’t live long, go home dust up and start training again, accept it that you were not so good at your first outing irrespective of what the social media and sycophants made you believe. Their praises bloated your size, you really were not that big, intelligent, matured and experienced for what you wanted and Bende people were right that you need to train some more, to go after a 17year old trainee. It is a craft and you must learn it, you must be taught by real men in the game, there is no short cut . Bend down and learn or keep wasting your resources.

The big question is why the lies that he moved on to his business and have no need of the House of Reps? Why deceive us that he had never had any interest on this position after he lost at the Debate, polls, tribunal and appeal court?

Recently, he went around paying media houses to preach he has no hands in sponsoring the litigation against Rep Benjamin Kalu maliciously because according to him “I have moved on after the elections and have faced my multimillion Naira businesses around the world“.

Wow! Saint Chima Njoku or Anyaso, so you moved on and it was your spirit that went to court begging to be joined to a matter that “no longer concerns you “ according to you ? The same spirit paid a senior Advocate of Nigeria to beg the court to allow you to join and benefit from the on going case that was paid for fully by you?

Saint Chima that faced his business, kindly explain whether these court processes you filed this year was forged against you too or you actually went to beg the court to join you because you want to go to House of Reps?

See the enclosed evidence and let you and your media team defending you and your friends supporting your desperation tell us that it was not true that you went to court begging to be joined to fight Benjamin Kalu or accept that you LIED and has been deceitful.

While I look for the counter affidavit from the defence counsel as well as the ruling of court, you sure have a question to answer to the gullible Bende people you have deceived. Your name is on the court processes since the beginning of this year and yet you say you are not involved ? More evidence coming. 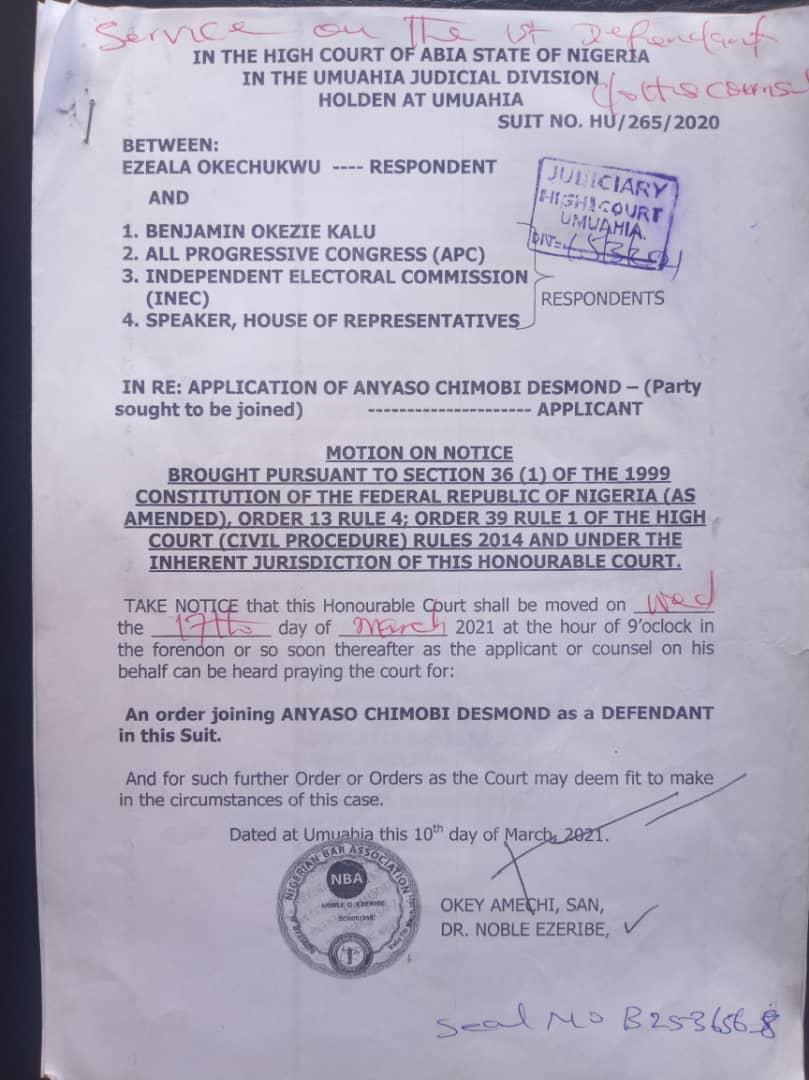 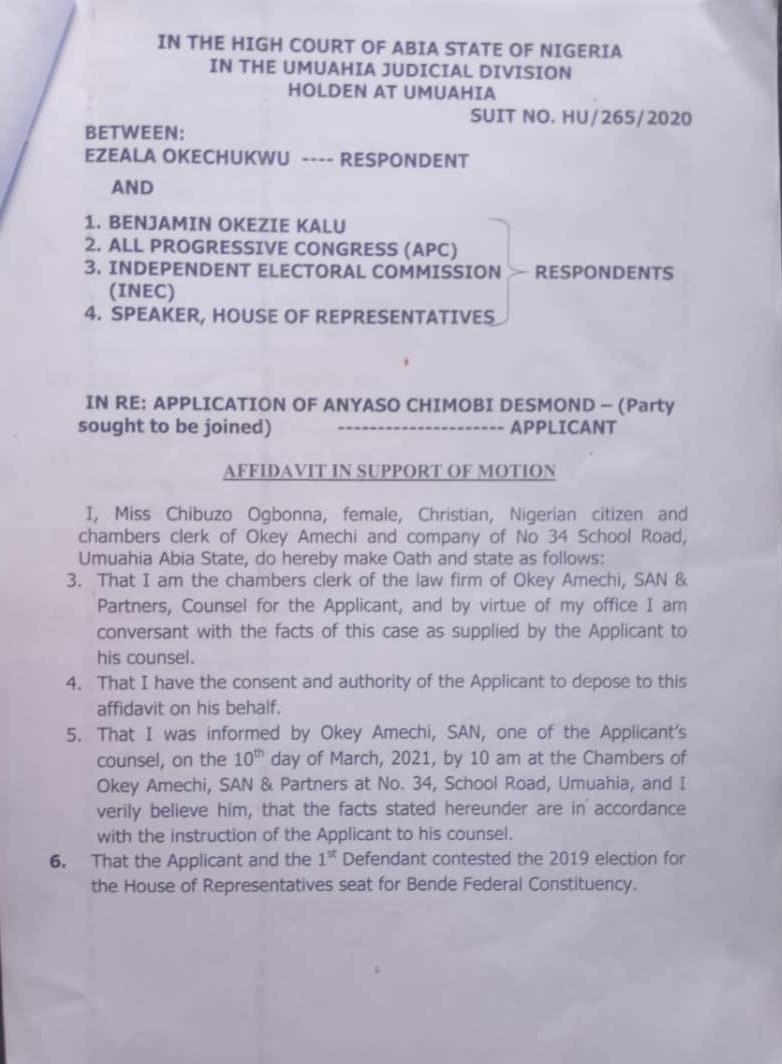 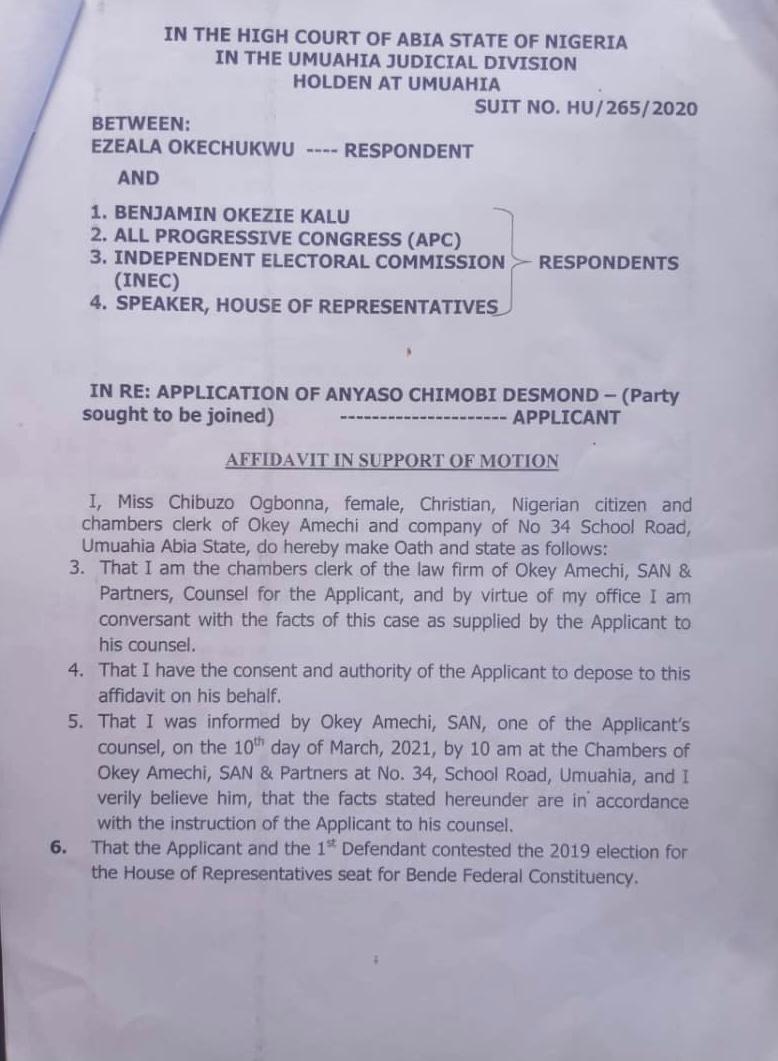 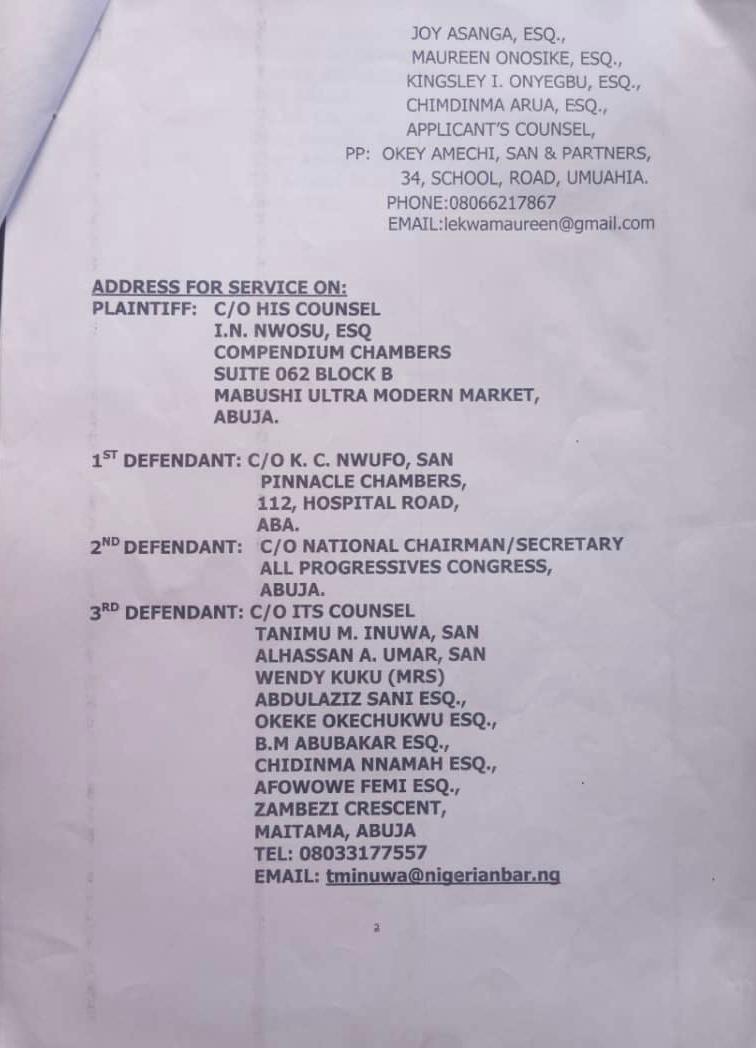 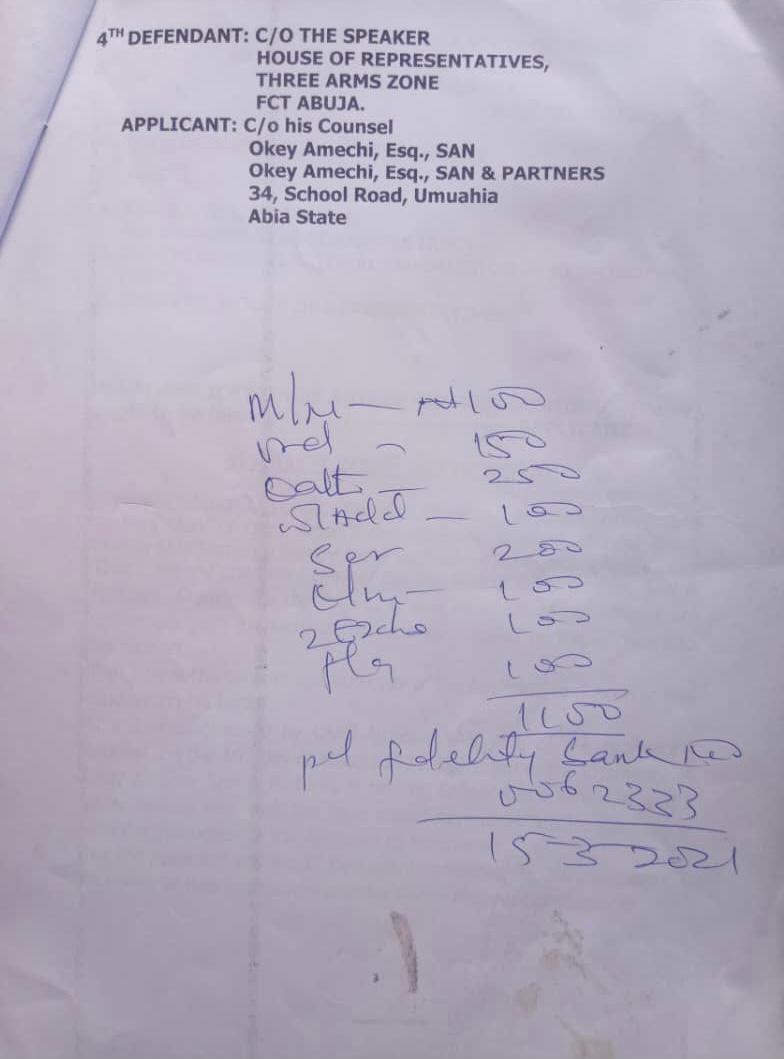 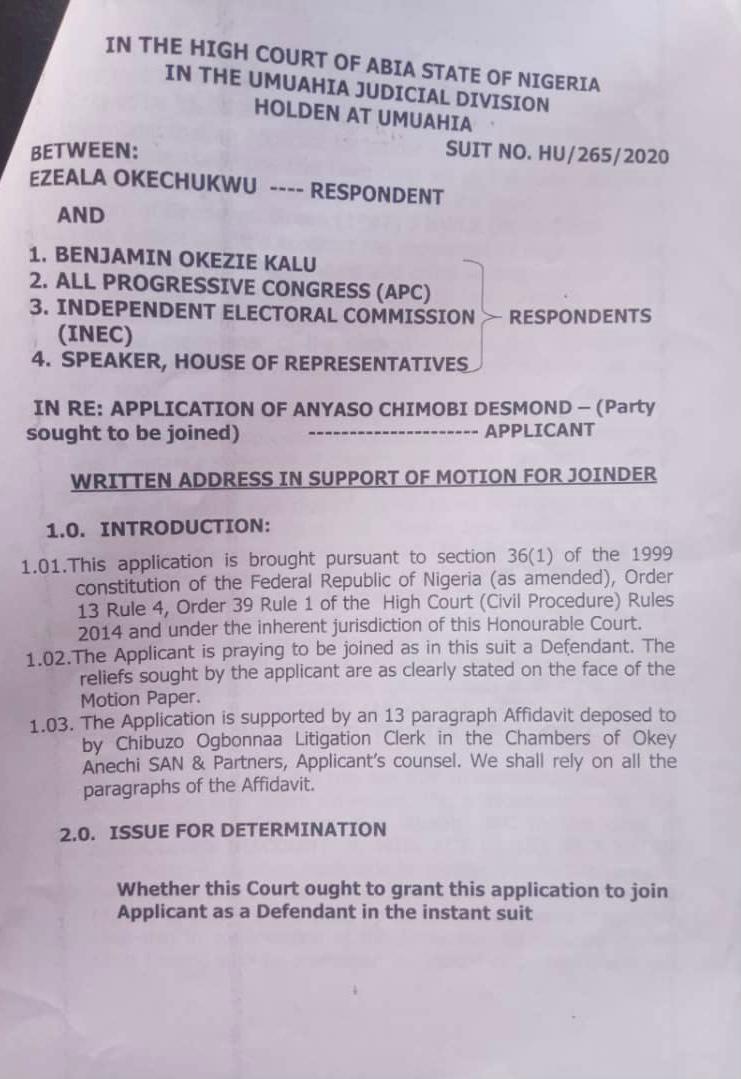 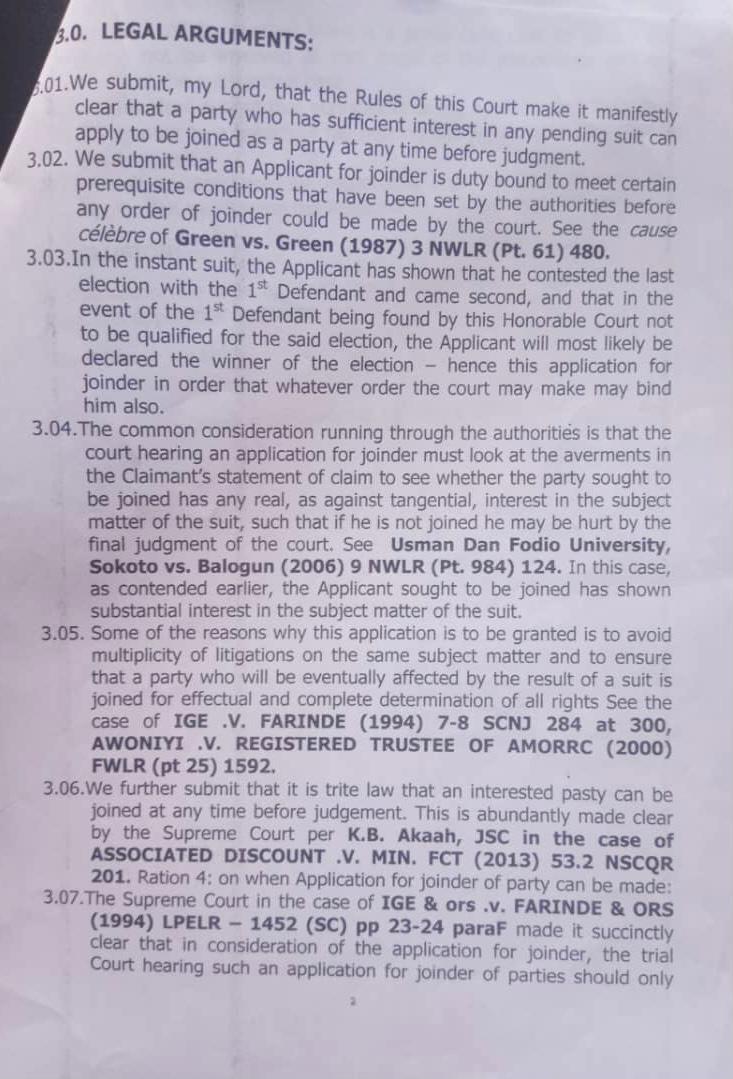