On the evening of October 20, 2020, the world watched in horror as a live bullets were opened on young peaceful protesters which was strategically executed by what appeared to be those meant to protect them at the Lekki Toll Gate in Lagos State.

Over the last two weeks, Nigerian youths and mothers took to the streets across the country in one of the most peaceful and organized protests Nigeria has ever witnessed; trying to demand an end to police brutality as well as urgent police reforms. The House of Representatives, heeding the cries of her constituents, deployed several interventions to reach a resolution of the peaceful agitations of the Nigerian youth regarding the menace of police brutality.

It was therefore shocking to see yesterday, several reports including video evidence suggesting a threat and intimidation of peaceful protesters by dismantling the security cameras at the Lekki toll gate, turning off the street lights and releasing security personnel to unleash rounds of live ammunition into the crowd as a result of which many Nigerians are reportedly hurt today.

The right to peaceful protest is a right enshrined in the 1999 Constitution of the Federal Republic of Nigeria. To fire into a crowd of peaceful protesters is not only unconstitutional, but a marked breach of the fundamental rights of Nigerians, including the right to life. It is a crying shame and an utterly disgraceful affair.

No matter what our actions are as a parliament today, October 20, 2020 will forever be known as the day Nigeria attempted to ear her young. In the history of abominable occurrences such as this, posterity is always unkind to those who stood by and did nothing, especially the leaders entrusted with the safety and welfare of citizens. Our reactions as a parliament so far have only addressed the protests and demands for police reforms by Nigerians. However, swift, bold and decisive action has become expedient in the face of this senseless attack of our constituents. The House of Representatives, which we have self-styled as the People’s Parliament must conduct a thorough and transparent investigation into the Security agency that carried this dastardly act, the Lekki Concession Company and any persons who played a role in the tragic events that occurred in the evening of October 10, 2020.

The clock is ticking as history watches how we respond to this. We must demand justice for the victims of the Lekki attack. The parliament must stand together in seeking for the peace and unity that we pledge daily. We must not be carried away by finger pointing.

No victory is found when we exert brute force on those who we perceive to be weaker, our strength lies in the ability to make peace not war. Where is the place of the “table“ during crisis? Every disturbance or war ends on the table. Whose duty is it to find this table? The leaders or the people? Does it mean we do not possess the tact to bring the stakeholders to the table? Leading during a crisis period demands a certain skill set, let us find them and use them, because we have them .

As leaders we should seek for the preservation of our nation. Despite the heaviness in my heart as I write this, I remain resolute in my commitment to a better Nigeria where peace , unity and progress reigns , so should you.

I condole with the families who lost their loved ones to these protests; and to the aggrieved people of Nigeria, I implore you to remain calm and obey all curfews. Rest assured that justice shall prevail in the end. 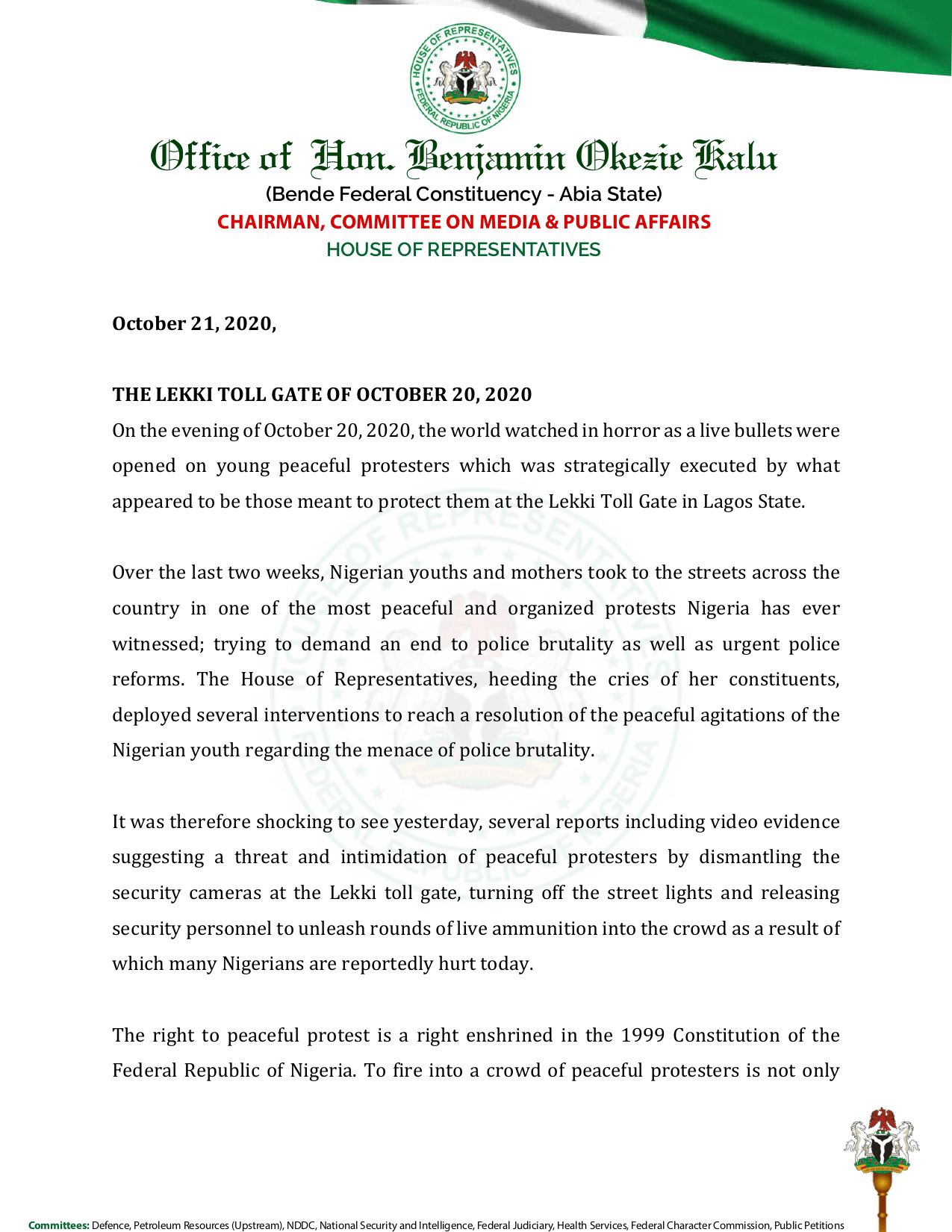 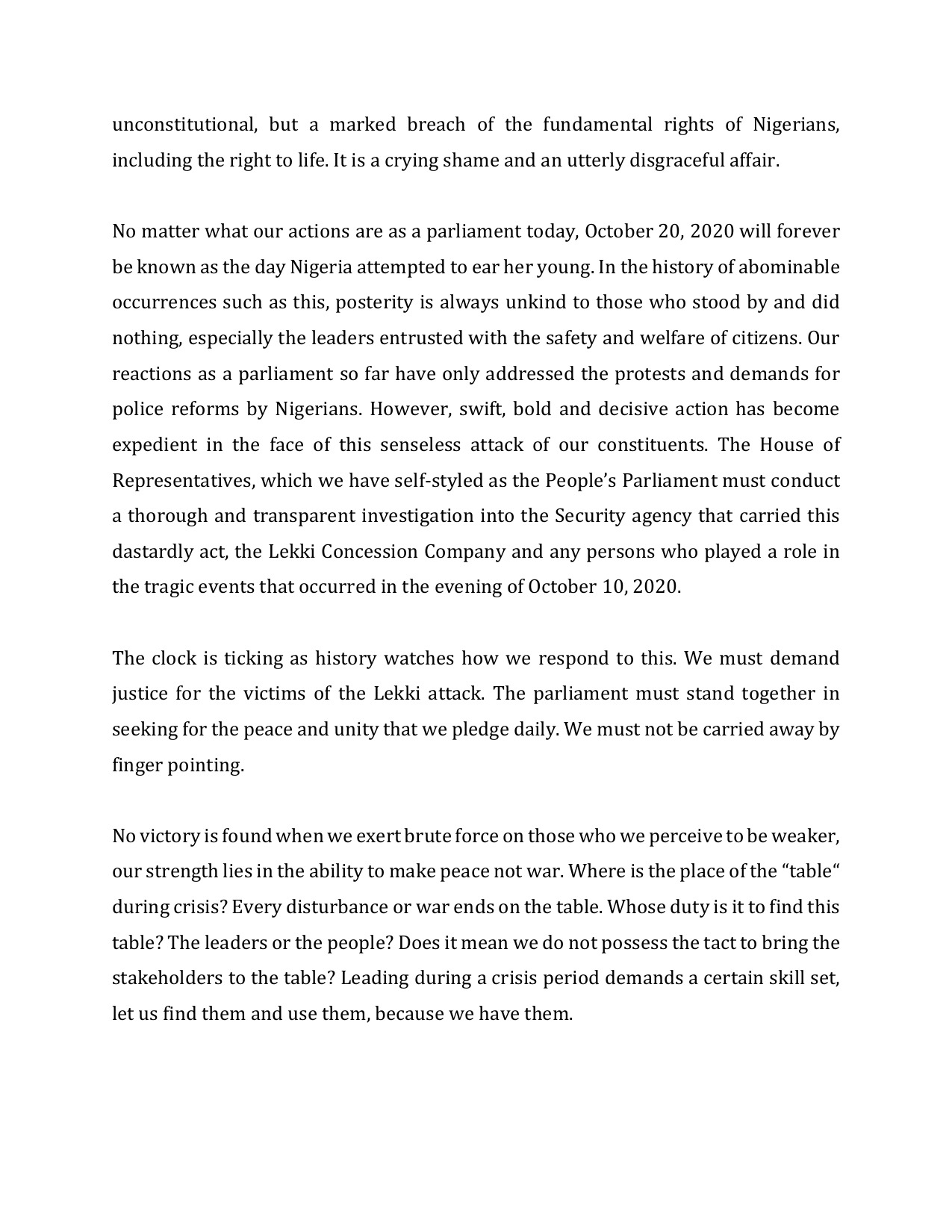 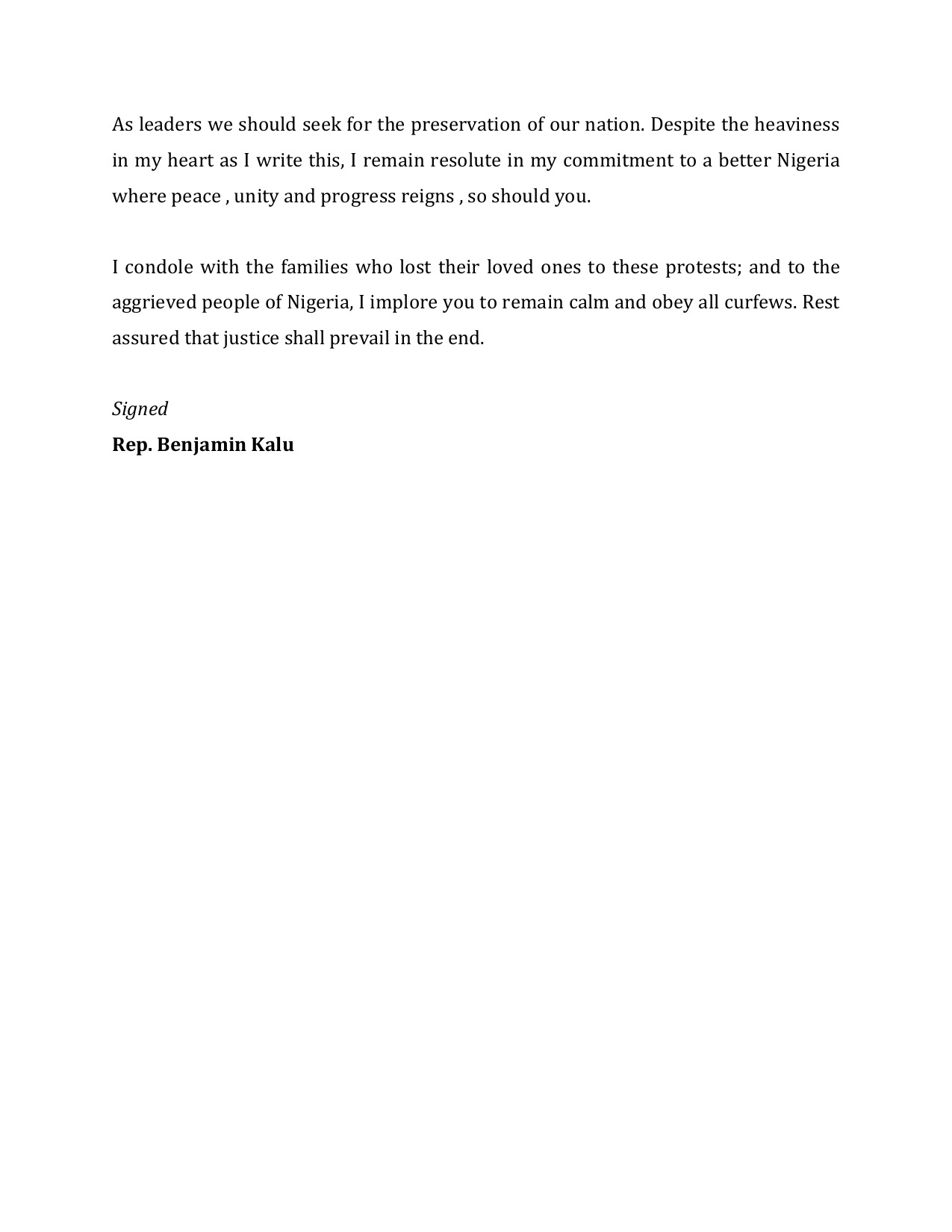