Member representing Bende Federal Constituency and Spokesperson of the House of Reps in expressing his solidarity for demands for police reform, has cautioned Abia youths to avoid damaging public property, stating that “the damaging and looting of private and public property in Abia State is unwarranted and does nothing to advance our cause as a people. Rather, it sets back the development of our state and hurts the economy of our region”.

Read his message below;

My Fellow Abians and the Entire Ndi Igbo,

Over the last two weeks, Nigerian youths and mothers took to the streets across the country in one of the most peaceful and organized protests Nigeria has ever witnessed to demand an end to police brutality as well as urgent police reforms. As the people’s parliament, the House of Representatives, heeded the cries of her constituents and deployed several interventions to reach a resolution of the peaceful agitations of the Nigerian youth regarding the menace of police brutality, including the refusal of the House of Representatives led by the Honourable Speaker Femi Gbajabiamila to pass the 2021 National Budget unless provisions are made therein for the compensation of the many victims of police misconduct and brutality over the last 10 years.

I can assure you that the House is committed to ensuring justice for the victims of police brutality.

However, it is with a heavy heart that I address the people of Abia State and indeed the entire Ndi Igbo following reports that the erstwhile peaceful End SARS protests have been hijacked by certain divisive elements resulting in rampaging and violent protests across the South East. My people, destruction does not build any nation. The damaging and looting of private and public property in Abia State is unwarranted and does nothing to advance our cause as a people. Rather, it sets back the development of our state and hurts the economy of our region.

I call on the people of Abia State especially the youths to be wary of devious mechanisms by political jobbers, anarchists, secessionists and mongers of violence to hijack the message of the protests against police brutality for their own selfish gains. Ndi igbo should avoid playing into the hands of mischief makers who want to corrupt the message of the End SARs protests by making it a regional attack on other regions living in Abia State or a religious attack on other religions.

While the federal and state governments continue to intensify efforts to address the legitimate demands of the peaceful protesters, I condole with the families who have lost their loved ones to these protests; and to the aggrieved people of Abia State, I implore you to remain calm and obey all curfews.

As a leader, despite the heaviness in my heart today following the loss of lives and properties over the last few days, I remain resolute in my commitment to a better Abia State, South East and Nigeria at large; and so should you.

Rest assured that justice shall prevail in the end. 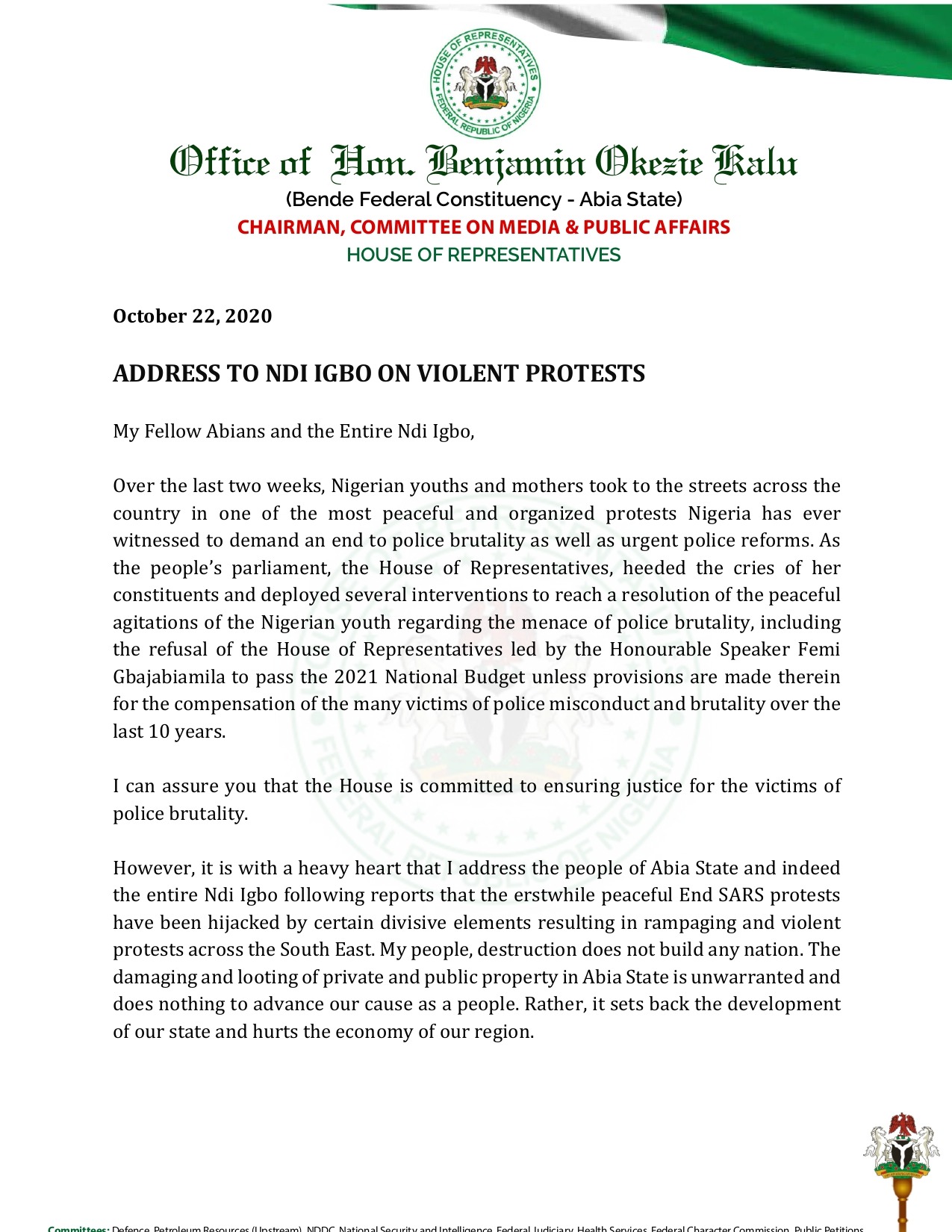