House congratulates Rep. Gimba and her constituents for lavish empowerment program, says not even the Speaker or Senate President could afford such outing

The House of Representatives has released a statement congratulating the people of Bama, Ngala, Kala-Balge Federal Constituency in Borno State for the recent empowerment outing organized by Rep. Zainab Gimba, taking care to mention that the outing was personally sponsored by Rep. Gimba and not National Assembly resources.

You will recall that Rep. Gimba recently sponsored a lavish empowerment program for her constituents, giving away empowerment materials estimated to be worth millions of Naira including 118 Vehicles, 200 tricycles, 800 sewing machines, 400 grinding machines, 492 water pumps and millions in cash.

Addressing the increased expectation of constituents all over the federation, the Speaker, Rep. Femi Gbajabiamila said on the floor of the National Assembly that Constituents should manage their expectations better knowing that such money was not released to any member to carry such outing and that Rep. Gimba’s actions were out of personal sacrifice and money from other sources. He further counseled that it would be wrong for any one in Nigeria to expect his/her representative to provide empowerment materials in such numbers for their constituents as the National Assembly is unable to afford such financial costs. He said,

“not even the Speaker or the President of Senate, could afford such outing, it has nothing to do with the resources from the National Assembly, all the same, congratulations to you and your constituents for showing such love…”

The official press release of the House is reproduced below:

The House congratulates Rep. Zainab Gimba (Ph.D), the good people of Bama, Ngala, Kala-Balge Federal Constituency in Borno State and all beneficiaries of the recent empowerment program organized by Rep. Gimba. The people of Kala-Balge remain one of the communities in Borno most affected by the crises of insecurity and ecological challenges, with entire communities cut off from the rest of the country for 5 to 6 months every year due to flood disasters and forced to migrate to Cameroon. Indeed, they deserve exceptional support.

As leaders concerned for the wellbeing of our constituents, it is a burden we bear, that we must often stretch above and beyond the call of duty, applying our personal resources to compensate for gaps in government’s limited resources. This is a call that members of the National Assembly over the years have often answered to the best of their individual capabilities. Afterall, the burden of leadership is inextricable from the call for personal sacrifice as readily apparent in the grand gesture of Rep. Gimba to her constituents estimated to be worth several millions of naira.

However, the House has become moved to issue an official statement in the interest of the various constituencies in the Federation, to correct any misconceptions that financial resources of that worth are available to members of the House for constituency projects.

Rep. Gimba’s remarkable gesture to her constituents is the first of its kind in the history of the House of Representatives and the Senate and has nothing to do with the National Assembly as it is a personal matter sponsored from her own resources. 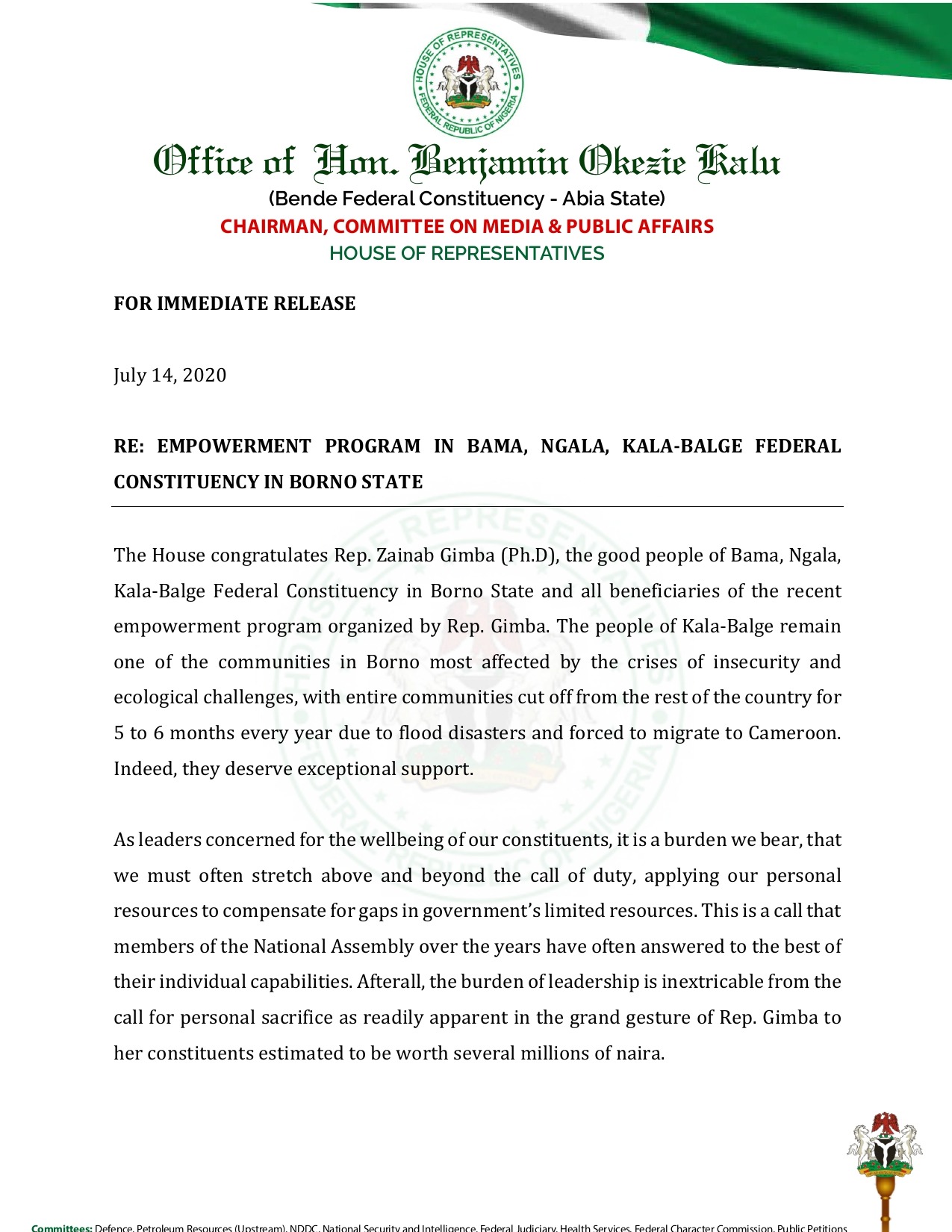 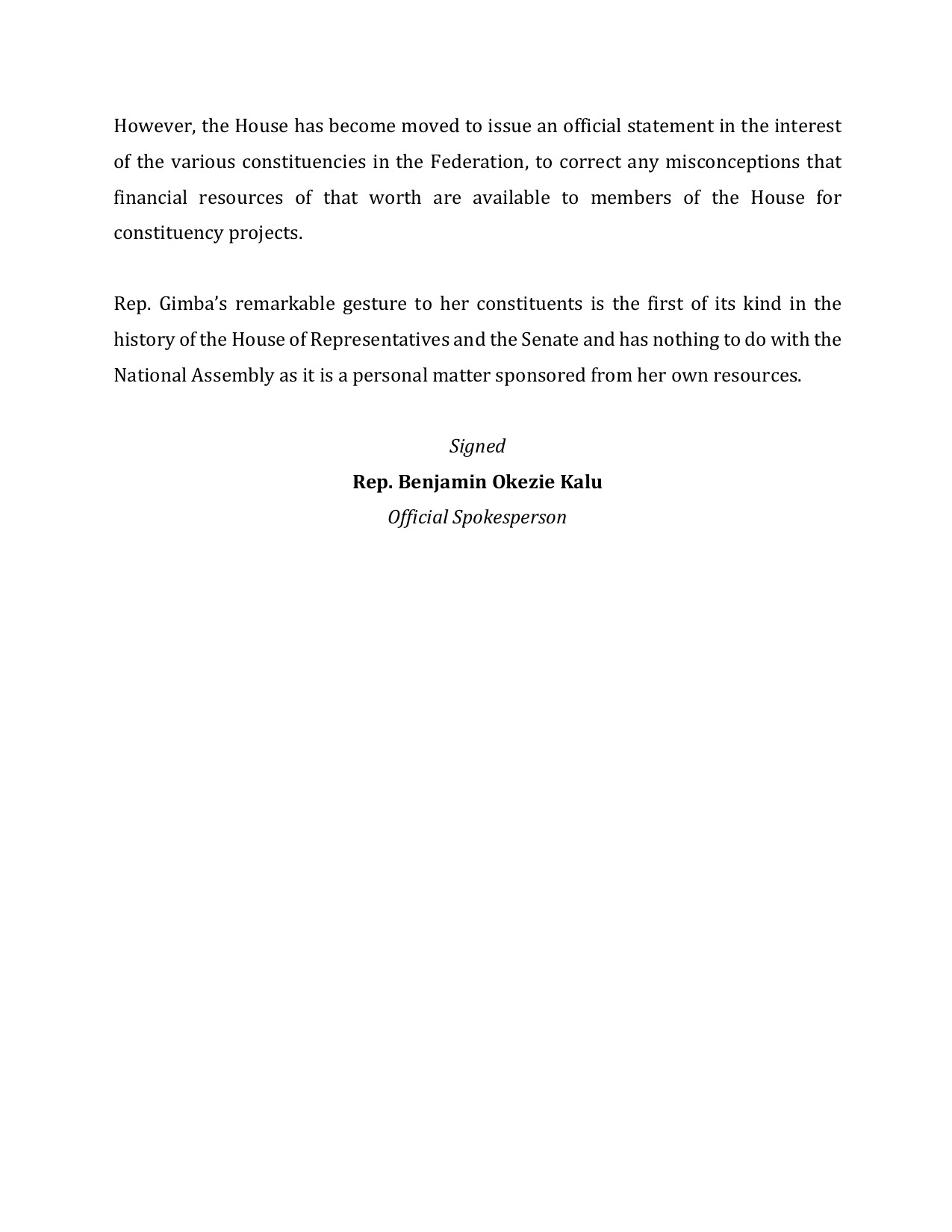 Birthday: Sir Stanley Ohajuruka is an inspiration and source of blessing to all Abians, says Rep. Benjamin Kalu in birthday message

Birthday: Sir Stanley Ohajuruka is an inspiration and source of blessing to all Abians, says Rep. Benjamin Kalu in birthday message