Following the publication by Sahara Reporters alleging that 50 lawmakers have tested positive to Covid-19 and are gravely ill, the House of Representatives has issued a statement through its spokesperson, Rep. Benjamin Kalu, refuting the claim as fake news.

Read the statement below:

RE: SAHARA REPORTERS AND ALLEGED PANIC AT NATIONAL ASSEMBLY OVER COVID-19 INFECTION

Fake news is like a virus eating away at the fabric of national development the world over because it seeks to misdirect the people either through information underload or overload. It sinisterly shifts the perception and focus of the citizenry, as a result of which there is a behavioural change in the people who have been ill informed leading them to act in belief of what they have heard, read or seen, as if it were the truth.

The scourge of Covid-19 has impacted all countries of the world, including every state, community and individual without exception. However, it is but a sickness and not a criminal sentence on infected people. Therefore, it should not be an offence to be sick or a crime to be infected, and people who have passed through infection or recovery should not be stigmatized for nobody knows whose turn it will be tomorrow. The National Assembly and our leadership have been at the fore of the battle to reduce the impact of this pandemic on the people of Nigeria. At the battlefront, occasional casualties are inevitable, especially when the warriors are not super human. Members of the National Assembly could fall prey to Covid-19, just like another person. It is therefore, unconscionable to attempt to weaponize this against the institution especially when the source of such strange information is a phantom.

This press release has become necessary to prevent undue panic in the society because the abovementioned publication could not be further from the truth. We wish to state that there has not been any panic at the National Assembly as alleged in the publication, and that to the best of our knowledge, it is absolutely untrue that 50 lawmakers tested positive to Covid-19. The House is certain that the Nigeria Centre for Disease Control (NCDC), the Federal Ministry of Health and the Presidential Task Force remain the most credible sources of data with regards to this pandemic and should be referred to for fact verification before misinforming the public.

Furthermore, the House is disturbed by the antecedents of Sahara Reporters as it recalls the previous publication of a video of parked vehicles falsely reported as belonging to the National Assembly. It is no longer news that of all arms of government, the National Assembly remains the favourite target of sensational journalism for media houses, however, there should be a limit to the spread of deceitful information aimed at aggravating the already existing tension around the pandemic. This is not fair to the public, as true journalism owes the debt of truth to the unassuming public.

The public is hereby enjoined to disregard, and consign to the trash bin, this misinformation. Sahara Reporters and other harbingers of fake news will do well to observe the ethics of professional journalism and investigate their news as the continued bias for sensational journalism only lends credence to the case for the regulation of social media.

It is also instructive to note that although the House of Representatives still works 5 days a week at committee level, it has been sitting only once a week since the pandemic broke and today’s adjournment until next week, is consistent with its Covid-19 safety precaution. This pattern will continue until the commencement of our summer break on 23rd July. 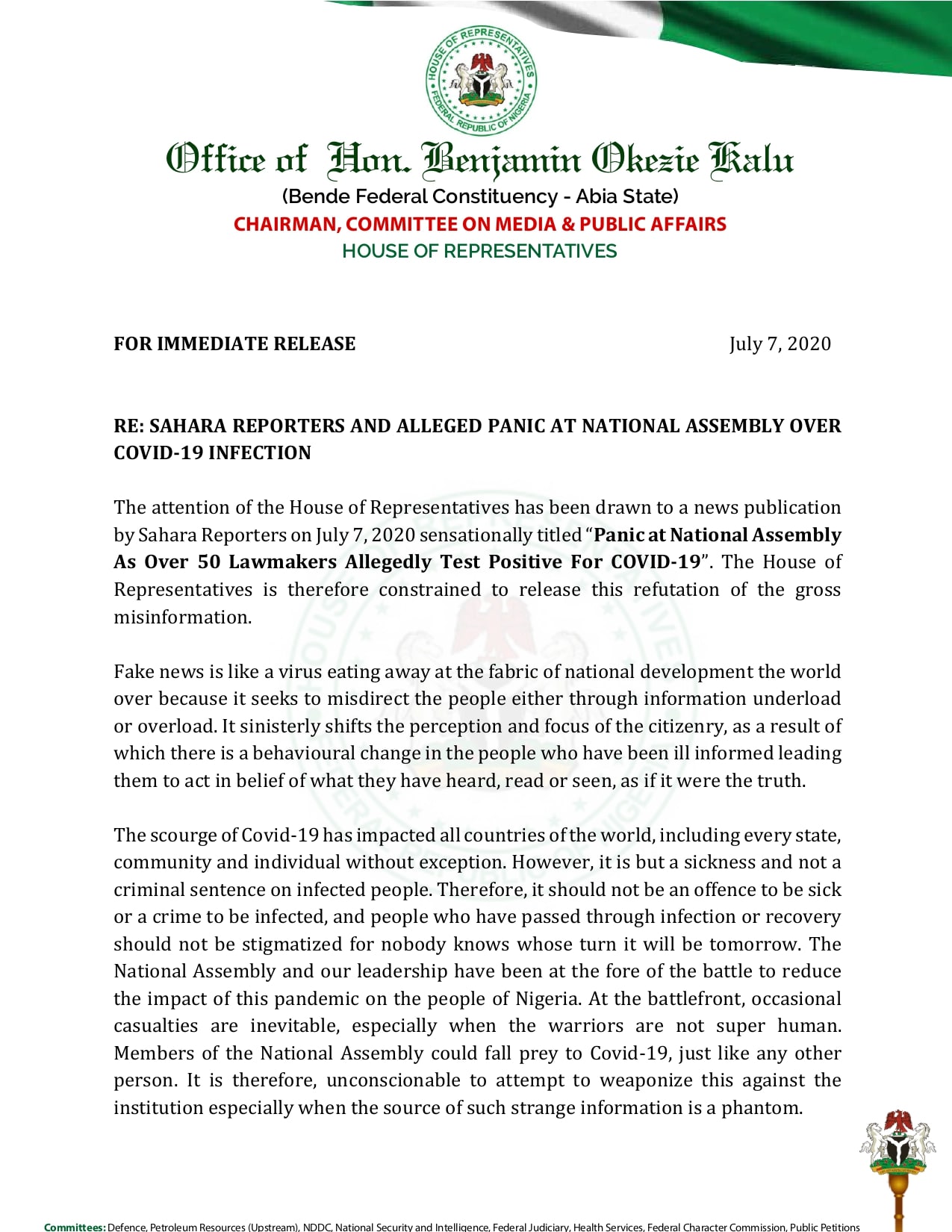 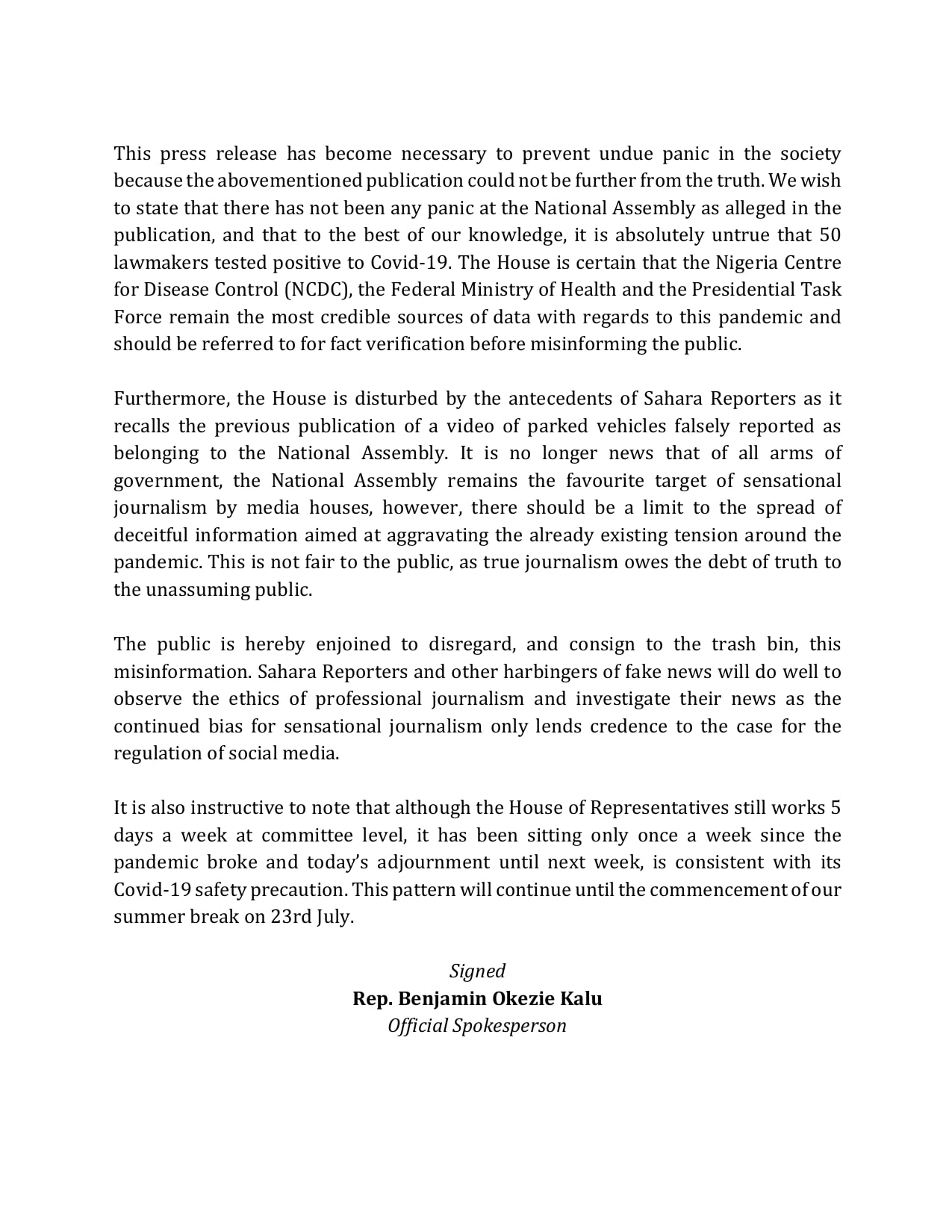 34 Bende indigenes shortlisted for Defence Academy Screening, Rep Ben Kalu urges them to give their best