Rep. Benjamin Kalu has accused aggrieved members of Senator Orji Uzor Kalu’s opposition in the last general election of hiring fake protesters to undermine Abia North’s senatorial representation for the sake of personal benefit. This statement was made following the demonstration that occurred yesterday at the national assembly complex by persons claiming to be from Abia North who demanded that the seat of Senate Chief Whip, Senator Orji Uzor Kalu be declared vacant.

Rep. Benjamin Kalu is the member representing Senator Orji Kalu’s federal constituency of Bende in the House of Reps. His press release reads as follows:

This publication has become necessary to address the mischievousness of certain impostors who have paraded themselves as Concerned Citizens of Abia North demanding that the seat of the Senate Chief Whip, Senator Orji Uzor Kalu, be declared vacant.

As the legislator representing Senator Kalu in the House of Representatives, as a member of the House representing Bende in Abia North, and as an eye witness to the phoney protest by the so-called Concerned Citizens of Abia North at the National Assembly complex today, I confirm that none of the demonstrators were recognizable to me as persons of Abia North extraction. Furthermore, information reaching me from all known associations of Abia North people in Abuja indicate that the soi-disant protesters are unknown elements.

The foregoing, including the Covid-19 protocols restricting interstate travel from Abia to Abuja FCT, strongly suggest that these picketers are paid protesters hired by aggrieved members of Senator Kalu’s opposition in the last general election desperate for one final ploy to deprive Abia North of the competent representation of Senator Kalu. They therefore do not represent the voice of the people of Abia North.

It must be clearly stated that during his brief absence, Abia North was not deprived of adequate representation as can be seen by the sheer amount and quality of capital projects in the 2020 budget secured by Senator Kalu for the benefit of the Senatorial district. Also, all calls by the hired protesters for Senator Kalu’s seat to be vacated are unfounded because by any form of computation, the number of sittings missed by Senator Kalu during his brief incarceration do not warrant such vacation. Afterall, the fact remains that due to the NCDC recommended Covid-19 protocols, the National Assembly has barely sat this year. Nevertheless, we are certain that at the next sitting of the senate, Senator Kalu will be present.

I wish to use this opportunity to thank the Senate for showing unwavering support for one of their own during this trying time; a camaraderie and solidarity that demonstrated exemplary faith in our judicial system, eventually allowing justice to run its full course.

I also thank the entire people of Abia North for all their prayers and for standing strong during the travails of Senator Kalu. It was Bishop Desmond Tutu who said, “…the texture of our universe is one where there is no question at all but that good and laughter and justice will prevail”. Justice has prevailed for the good of the people of Abia North who are happy to continue enjoying the quality representation by Senator Kalu in the red chamber.

All aggrieved members of Senator Kalu’s opposition in the last general election are hereby cautioned to shun the temptation to undermine Abia North’s senatorial representation for the sake of personal benefit. 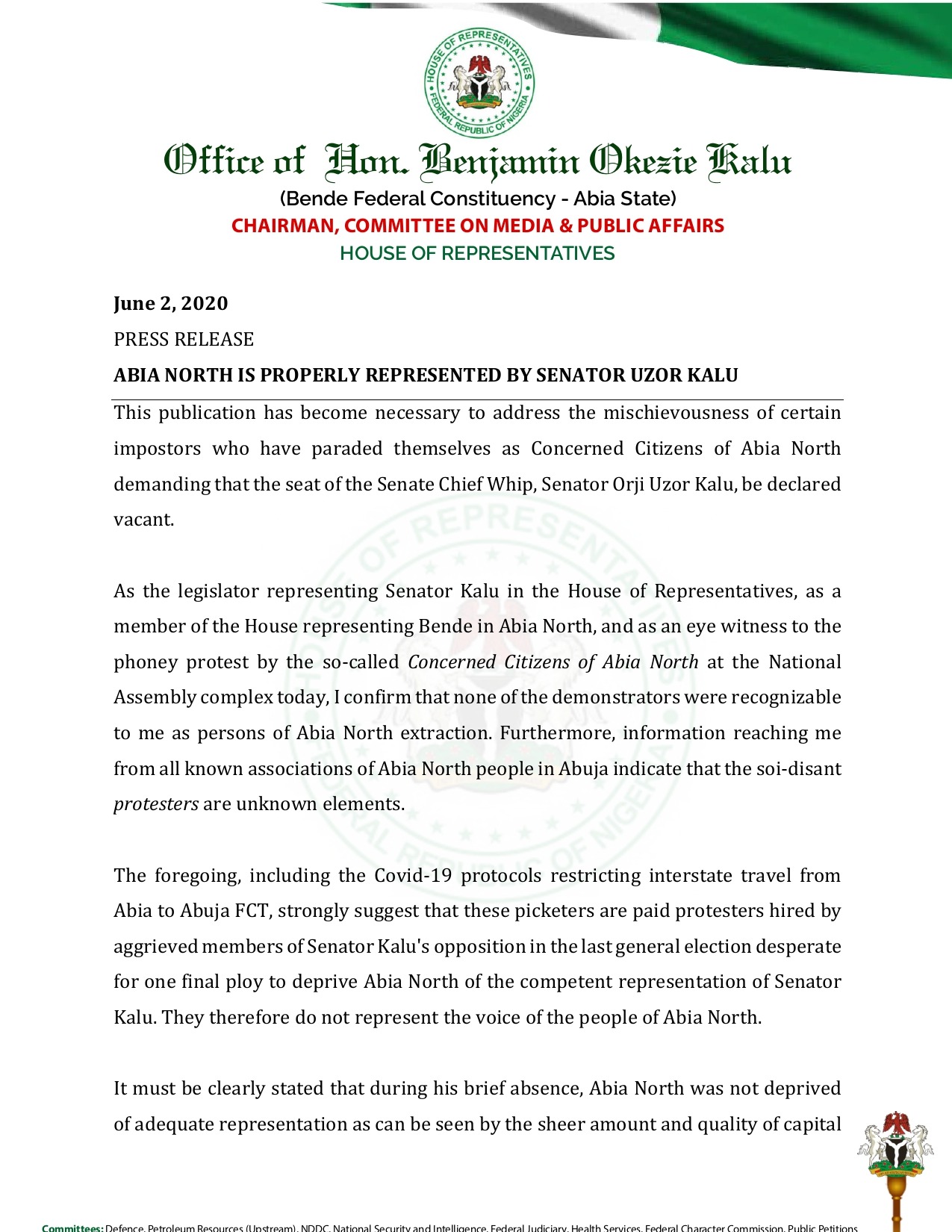 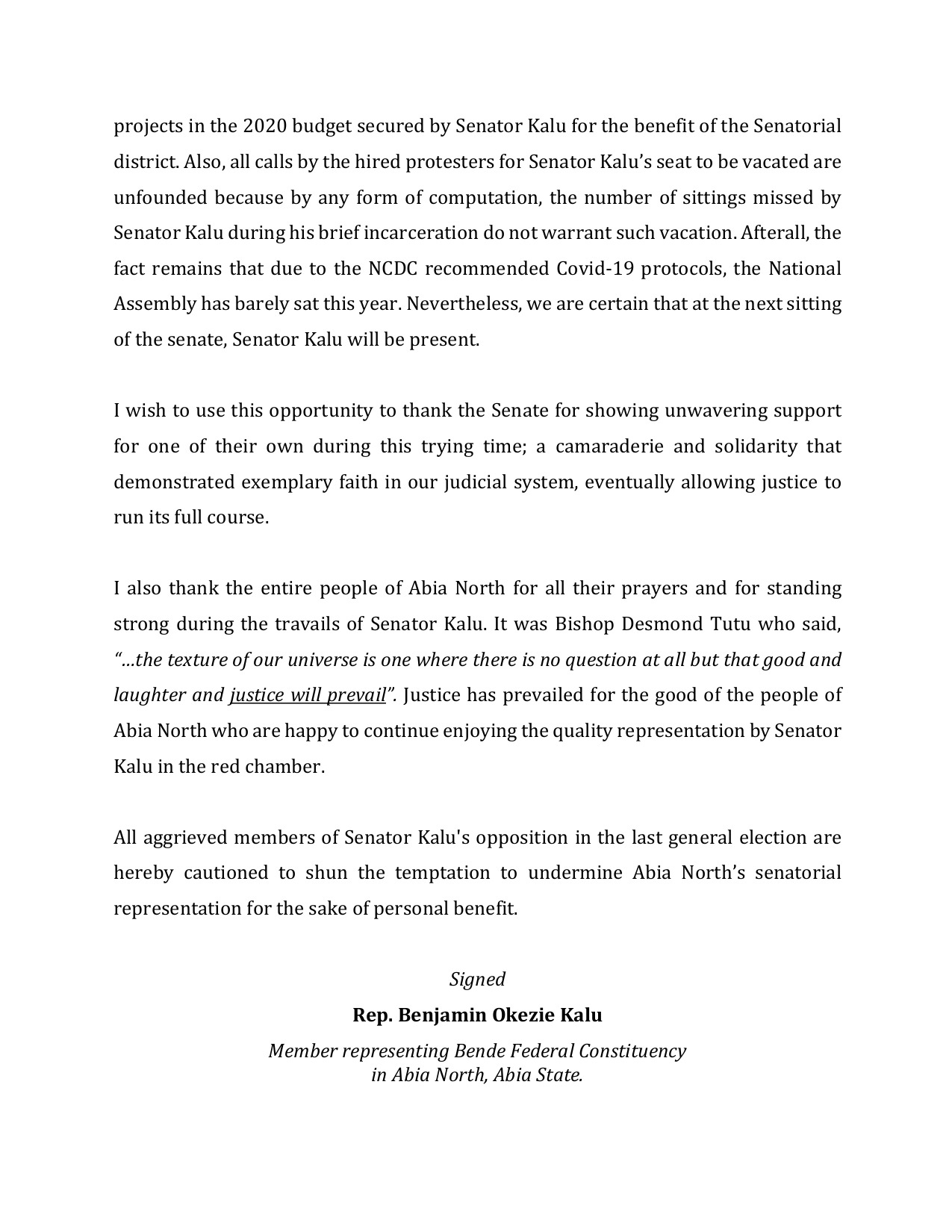