The House of Representatives has released the following statement signed by the Spokesperson, Rep. Benjamin Kalu, in response to several allegations raised against it by NDDC Executive Director (Projects), Dr. Ojougboh in a heated television interview with Arise News.

RE: DEFAMATORY STATEMENTS AGAINST THE HOUSE OF REPRESENTATIVES BY DR. OJOUGBOH, NDDC EXECUTIVE DIRECTOR

The attention of the House has been drawn to certain statements by Dr. Cairo Ojougboh, Executive Director, Projects and member of the Interim Management Committee (IMC) of the Niger Delta Development Commission (“NDDC” or the “Commission”), in what can only be described as an unhinged television interview on Arise News. The House of Representatives understands that the spurious and defamatory claims made in that interview by Dr. Ojougboh were engineered to cast aspersions on its integrity and credibility. Therefore, while we cannot speak to the activities of the previous assemblies, it has become imperative for the 9th and present House of Representatives to issue the following rebuttal.

BUDGET DELAY
The claims by Dr. Ojougboh that the House of Representatives delayed passage of the 2019 NDDC budget are simply untrue and indicate a concerning ineptitude, ignorance and/or deliberate mischief by the Executive Director to deceive Nigerians about the financial improprieties of the Commission. When in reality, it has been the House pushing the Commission to do the needful and render account to the Nigerian people.

Section 18(1) of the NDDC (Establishment) Act mandates the Commission to, not later than 30 September in each year, submit to the National Assembly, its budget estimates for the following year. The House recalls that for more than 13 months after the time required by law, the Commission deliberately failed to submit its 2019 budget to the National Assembly for approval, choosing instead to engage in illegal and unauthorized spending to the tune of billions of naira. It took the intervention of the House, following a motion moved by Rep. Benjamin O. Kalu on November 26, 2019, to compel the Commission to present its 2019 budget. The House further recalls that on December 10, 2019, the date fixed for the budget defence, the Commission failed to appear with its 2018 budget performance report, a document critical to assessing its previous expenditures and approving its 2019 budget; as a result of which, the budget defence had to be stepped down. The Commission was only able to return with their budget performance report on February 5th, 2020 following which the House passed the 2019 budget 3 weeks after (February 27th, 2020).

The House states that the negligence and/or deliberate mischief of the Commission has also frustrated all efforts by the National Assembly to expeditiously approve the Commission’s 2020 budget. We recall that on April 28 and May 12, 2020, the National Assembly sent joint reminders to the Commission requesting copies of the 2019 budget performance report to enable it consider the Commission’s 2020 budget. Unfortunately, in a reply dated May 13, 2020, the Commission cited the COVID-19 pandemic as excuse for their failure to provide their 2019 performance report. This is curiously ironic considering that despite the pandemic, they have been able to access their offices to spend monies, handle sharing of palliatives, make payments in billions of Naira and undertake transfers, promotions and suspensions of public officers, etc. Therefore, till date, the Commission has refused to render an account of their 2019 budget expenditures to Nigerians.

BUDGET PADDING
Dr. Ojougboh’s claims that the House of Representatives “vandalized and raped” the 2019 budget by adding ₦85bn Naira are not only false, but paint a rather disturbing image of the Executive Director’s emotional state as well as his relationship with facts and reality.

Contrary to the allegations of padding, the House recalls instead, that it was forced to cut down the budget estimates from ₦409bn to ₦345bn when it was discovered that the Commission’s projected expenditures were unrealistic, having exceeded their revenue source by ₦63bn.

The House is also concerned by Dr. Ojougboh’s grave allegations attempting to indict President Muhammadu Buhari of influencing the 2019 NDDC budget by inserting the so called “President’s regional projects”. While we have a duty to remove any suspicious items identified in the budget, it must be stated that the House is not aware of any line items in the 2019 budget estimates bearing the name or indicating the personal interests of the President.

FORENSIC AUDIT
The insinuations by Dr. Ojougboh that the House of Representatives is against the ongoing forensic audit of the Commission are untrue and misleading. The House has always expressed its total support for the forensic audit ordered by the President.

Echoing the sentiments of Nigerians, our only concern is as to the propriety of the appointment or supervision of the forensic auditors and also to ensure that any auditing process is done in accordance with the Constitution. The House insists that a supervision of the auditing process by the IMC or any other subjects of the audit, defeats the cardinal principle of natural justice, nemo judex in causa sua (no-one is judge in his own cause) and undermines the integrity of the investigation.

As the People’s parliament, the 9th House of Representatives remains committed to exposing corruption, inefficiency or waste in any aspect of the government. We state that our support for the forensic audit does not in any way silence or preclude our oversight mandate in Sections 88 and 89 of the Constitution of the Federal Republic of Nigeria (CFRN) (as altered) as both arms of government must continue to work according to the principles of the doctrine of separation of power. It is an exercise of the system of checks and balance and not a duplicity of effort. Therefore, the House will continue independent investigations in order to be equipped with information in anticipation of the outcome of the forensic audit. 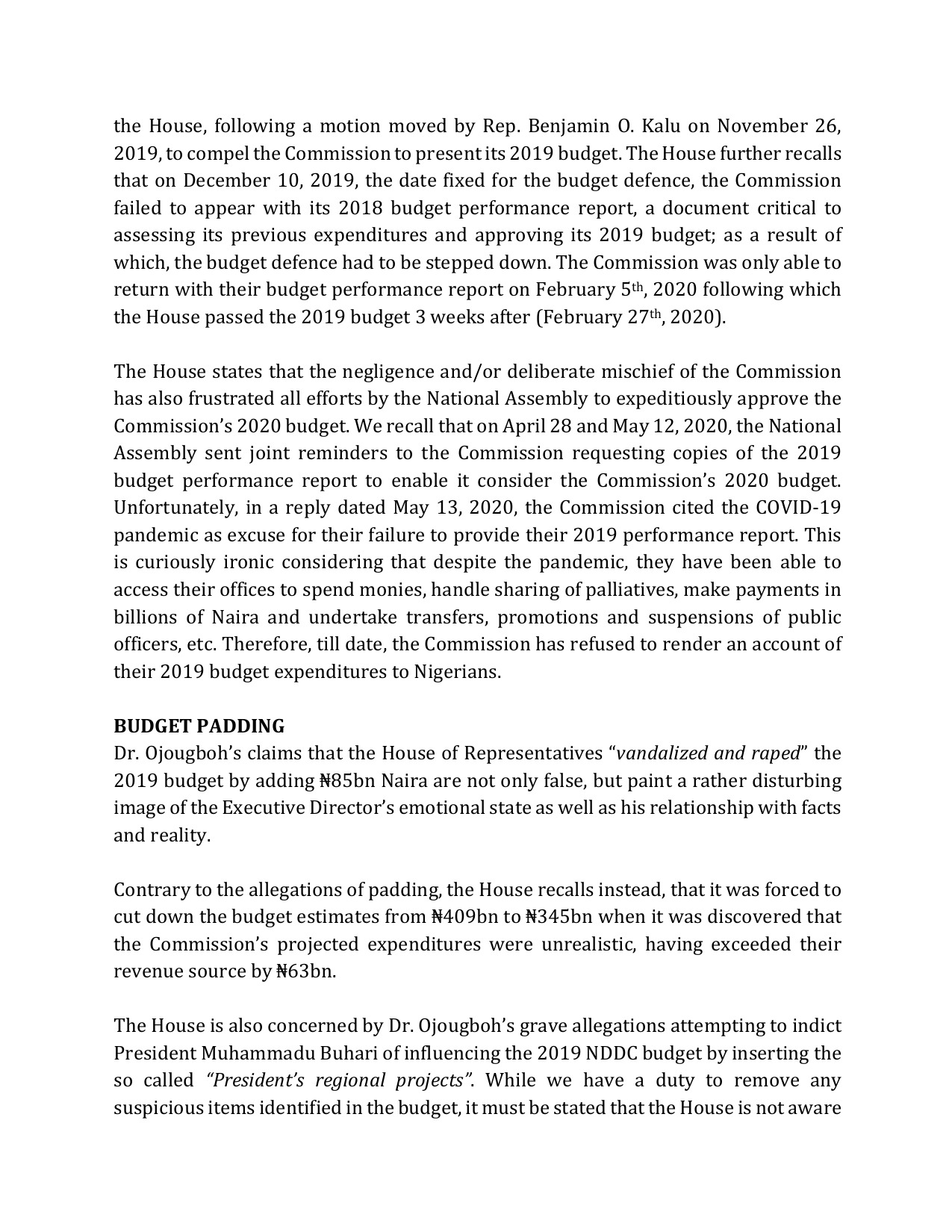 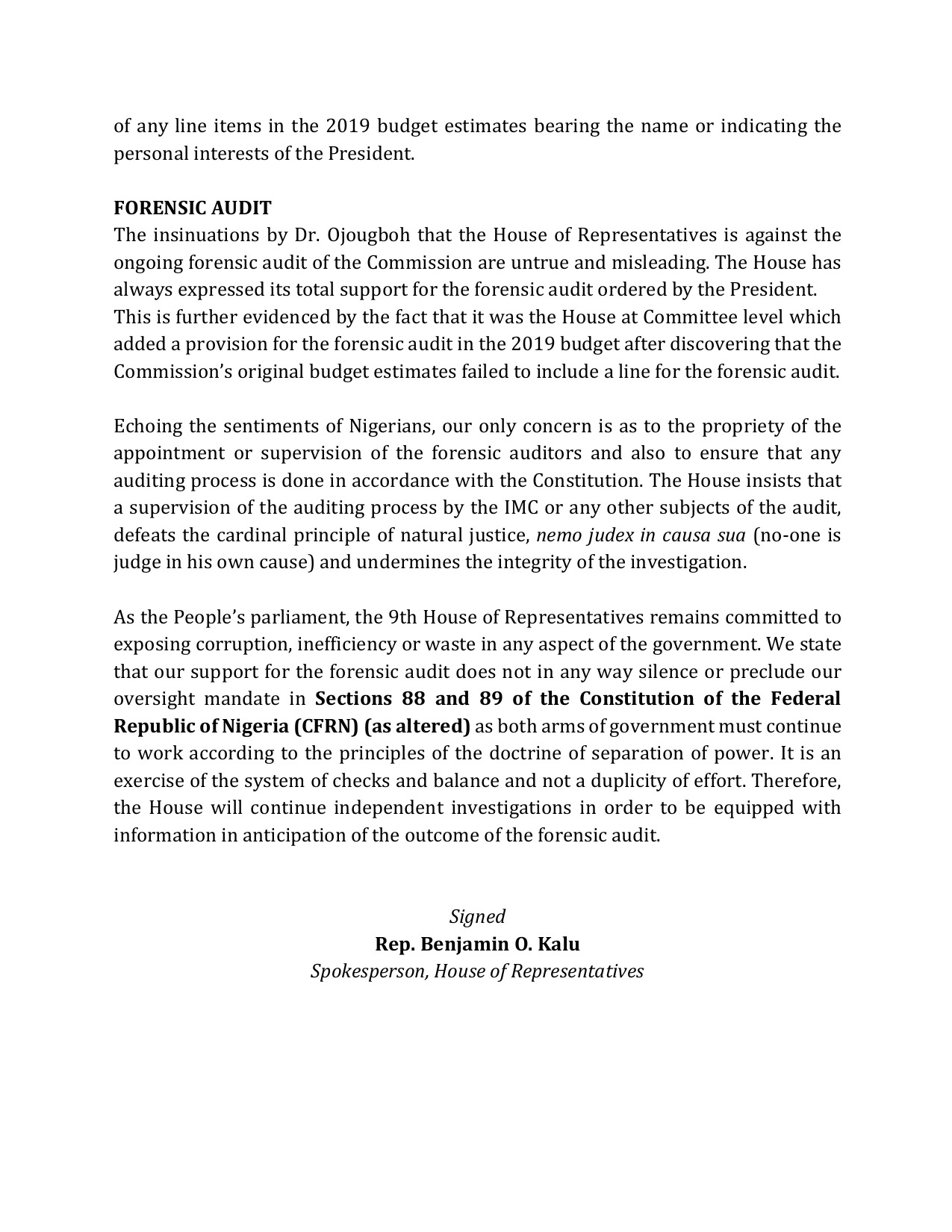