NSIP: House of Reps reacts to slanderous publication by Maryam Uwais, SA to the President and Sahara Reporters

by Drum Africa
in Politics
64
0

RE: SLANDEROUS PUBLICATION BY MADAM MARYAM UWAIS AND SAHARA REPORTERS

The insinuations in the above mentioned publications that the 9th House of Representatives labeled the NSIPs as a failure and a scam are incorrect and untrue. So also are the insinuations that the 9th House of Representatives has sought to compromise the NSR and input the names of undeserving Nigerians as beneficiaries of the programs.

The 9th House of Representatives under the leadership of the Speaker Rep. Femi Gbajabiamila acting upon complaints from Nigerians in 360 federal constituencies regarding the inadequate spread of the NSIPs, and also concerns that the NSR is outdated and does not reflect an accurate representation of the poor and vulnerable in Nigeria, intervened through a cordial interaction with the Honourable Minister of Humanitarian Affairs, Disaster Management and Social Development, Sadiya Farouq with the sole aim of ensuring and enhancing the delivery of service as well as the equitable distribution of the programs to the Nigerians most in need of them during this period of the Covid-19 pandemic.

Part of our concerns expressed at this meeting was the need to review and improve the outdated NSR as well as the methodology deployed in identifying the poor and vulnerable in the various communities in view of the complaints from several constituencies that they have not benefited from the programs. An outcome of this meeting was an understanding per the Speaker’s proposition that a legislative framework is needed to maximize the efficiency of the NSIPs.

We are aware that Madam Uwais has on certain occasions, including a TV interview on ChannelsTV’s Sunrise Daily programme, cited Section 14 of the Freedom of Information (FOI) Act as providing an exemption by which the FG can refuse to reveal details of the NSIPs to the National Assembly. This suggests a deliberate attempt by Madam Uwais to conceal information pertaining to the financial activities of NSIP from the elected representatives of Nigerians as we especially recall that she blatantly ignored a letter of enquiry from the House Committee on Public Account addressed to her in her capacity as Special Assistant to the President on NSIP dated August 6, 2019 with reference number HR/SCO5/52/XX/400 requesting a brief of the activities (including income and expenditure profile) of her office from the year 2014 to 2018.

While stating categorically that the operations of the NSIP do not fall under the exemptions contemplated in Section 14 of the FOI Act, it is instructive to note that Sections 88 and 89 of the Constitution vests exclusive powers of oversight on the legislative arm of government which also applies to any and all forms of government intervention programs, including the NSIP which is a disbursement of the nation’s funds appropriated by the National Assembly in the first place. The powers of the National Assembly to investigate or request any information from the executive are vested by the Constitution and are not subject to the stipulation of the FOI Act.

We must remember that the doctrine of checks and balances is an essential element of our constitutional democracy and once it is discarded our democracy becomes wobbly. Therefore, the 9th House of Representatives frowns at any fake news or publication that seeks to cast aspersions on its intentions and commitment to the people of Nigeria in its exercise of constitutional duties.

As the People’s Parliament and in the spirit and letter of Sections 14, 88 and 89 of the Constitution of the Federal Republic of Nigeria (the Constitution), our priority remains to employ all legislative interventions to ensure the welfare of Nigerians in the face of the Covid-19 crisis and the economic hardship it has wrought on the poor and vulnerable among us. 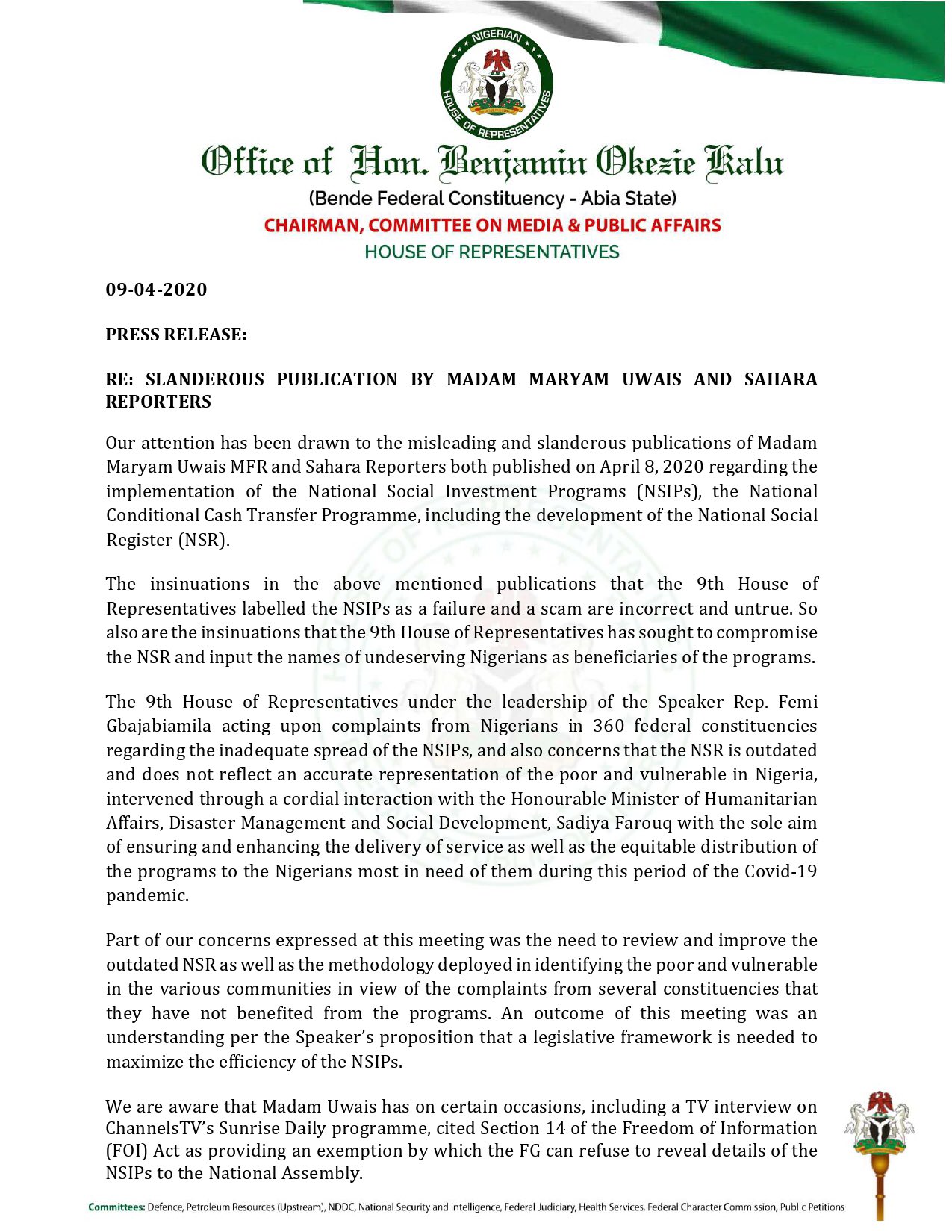 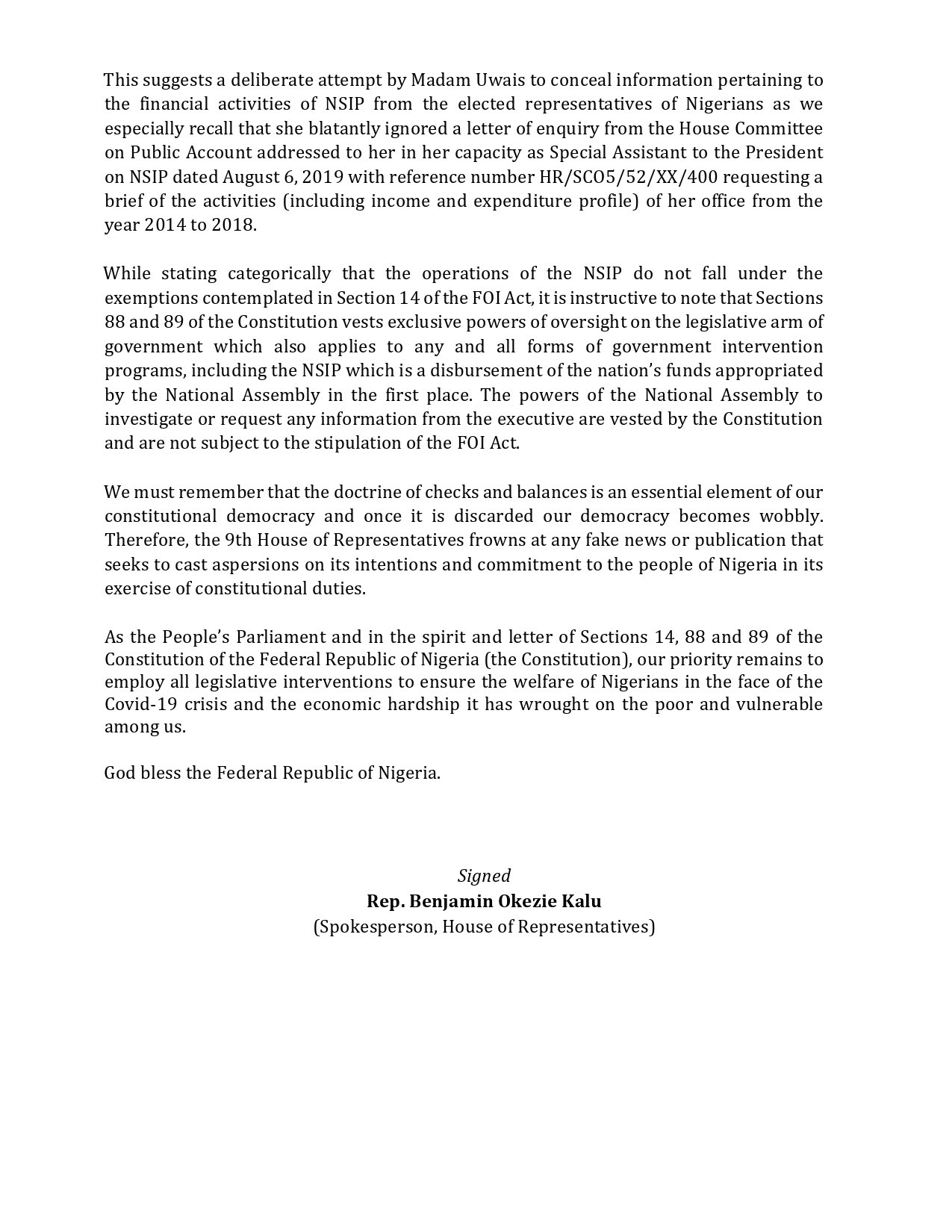