by Drum Africa
in Uncategorized
61
0

The Office of Rep. Benjamin Kalu (MHR), spokesperson of the House and Member representing Bende Federal Constituency in the National Assembly has come out to refute an online publication alleging his interest to replace Dr. Orji Kalu in the Senate.

In a press release signed by the legislator’s Special Adviser on New Media and reproduced below, the office denied the contents of the publication describing it as sponsored by political desperadoes, whose self-validation is attached to the offices they occupy rather than in the fulfilment of the mandate of such office.

Our attention has been drawn to an untrue, unfounded and mischievous article published online at the following URL; http://news-af.feednews.com/news/detail/d12e1fd854cb2e8fd7c381cbba2bd458?country=ng&language=en&share=1&client= (screenshots exhibited below), alleging that Rep. Benjamin Kalu is battling to replace Senator Orji Kalu in the Senate. It has also come to our attention that this rumour is being sponsored by certain persons from Abia State whose inordinate ambition has led them to mischief. We advise such persons to be careful as no information can really be hidden from someone who chairs the media committee of an institution such as the House of Representatives.

It is quite unfortunate the way and manner we play our politics of desperation in Abia State. To these mischief makers, we ask, why the desire for more positions when you are yet to fulfil the mandate of the one you have been given? Is this not inordinate ambition? Rep. Benjamin Kalu will not be drawn into the league of such political desperadoes, whose self-validation is attached to the offices they occupy rather than in the fulfilment of the mandate of such office. The era for glorified prefixes and suffixes is gone, because what the masses want to see is the competence and value adding element of the office holder.

It is no wonder that this unfounded report comes a day after the successful unveiling of the first official magazine of the House of Representatives which was innovated by Rep. Benjamin Kalu. Innovation is the hallmark of success like we all know and Rep. Benjamin Kalu’s innovation should not attract attacks from the home front or fuel any inferiority or superiority complex. Rather, it should be encouraged as an attempt to serve better.

Senator Orji Kalu has not exhausted the entire fair hearing windows allowed by law on his conviction, so the hurry by these mischief makers to leverage his predicament is not only premature, but is insensitive and diabolical. We should allow the law to be fully exhausted before calling in any ambition. Recall that of all the past Senators who were similarly convicted and sentenced none was removed before the exhaustion of all appeal options. You are advised to be contented with your current position and direct your energy to fulfilling your mandate.

It goes without saying that only the naive and ignorant will write Sen. Orji Kalu out at this point. At the end the law will have its way. To everyone strategizing to replace him, we wish you well but urge you to do that without making casualties of the innocent. You are advised to desist from such slanderous and mischievous publications to avoid being bathed with the hot water you have boiled. Remember that at the end, power comes from God not man; and irrespective of all manipulations, it is God and the people who decide. 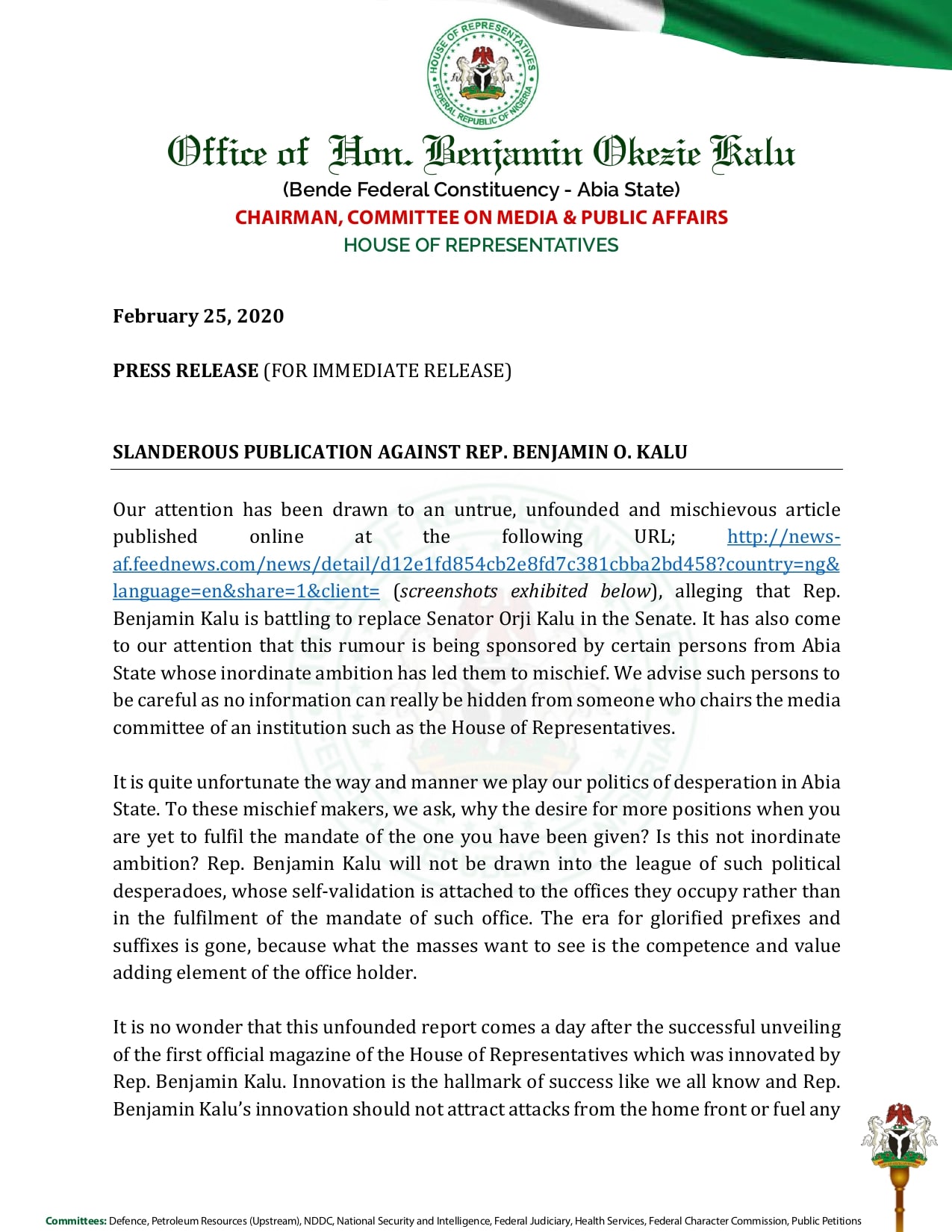 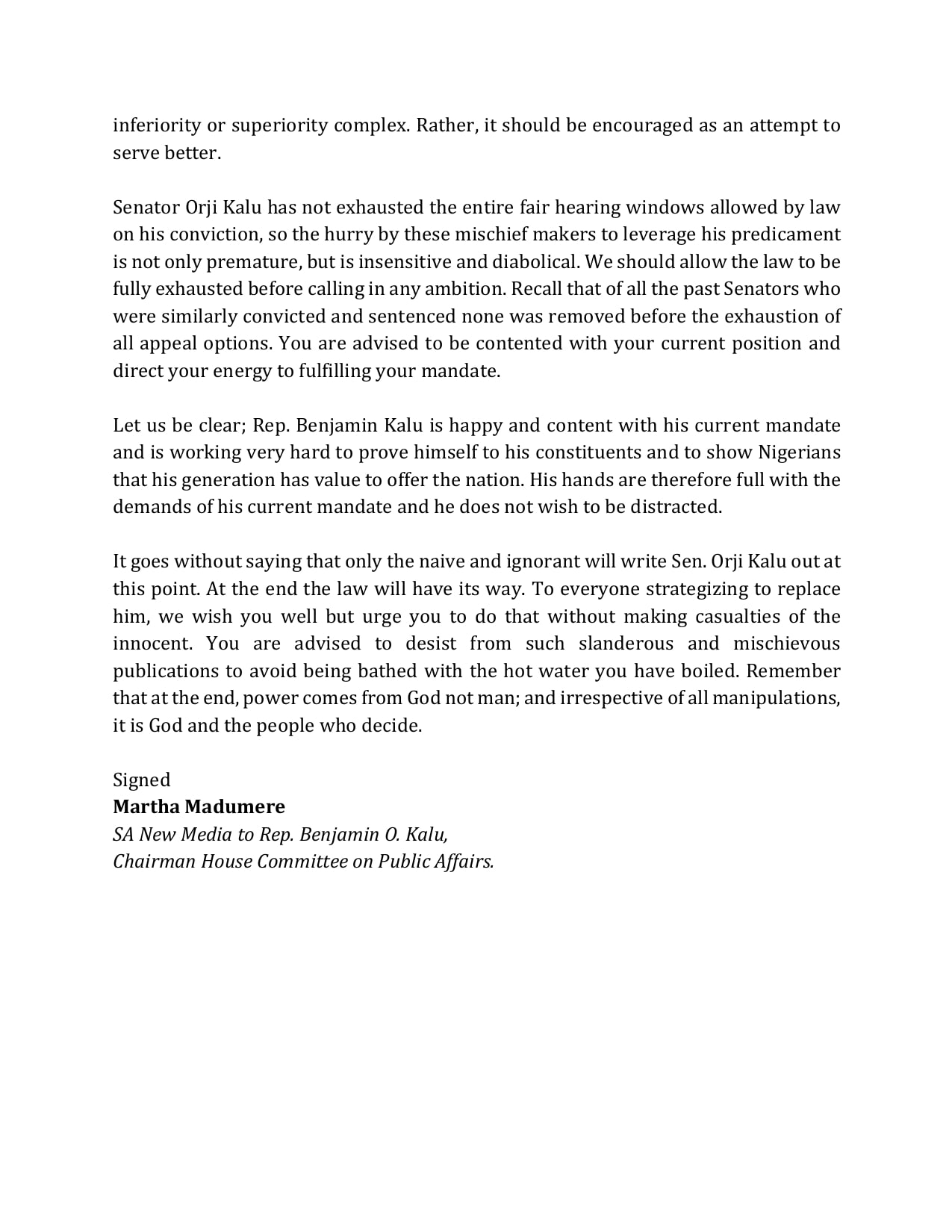 THE BIAS AGAINST THE LEGISLATURE IS THE HIGHEST FORM OF SELF-SABOTAGE: Rep. Benjamin Kalu’s response to SERAP’s threatened court action

INEC or ABSIEC, APC Will Participate In The Coming LGA Elections; the Agencies Will Be Fair; Rep. Benjamin Kalu insists

INEC or ABSIEC, APC Will Participate In The Coming LGA Elections; the Agencies Will Be Fair; Rep. Benjamin Kalu insists