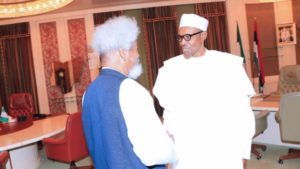 Nobel Laureate, Professor Wole Soyinka, has given reasons as to why President Muhammadu Buhari cannot ignore the four-page open letter addressed to him, by former President Olusegun Obasanjo, on Monday.

Soyinka, speaking with the Daily Sun, said Buhari will be acting amiss if he decides to “play deaf” to voices like Obasanjo and former Governor of old Kaduna State, Balarabe Musa.

“Read the Obasanjo statement. It should be obvious to government, by now, that the nation is not sleeping easy.

“When voices as ideologically separated as Obasanjo and Balarabe Musa harp on the same theme, government should understand that this is not the time to play deaf,” he said.

Obasanjo, had in the letter, which centred largely on insecurity in the country, said as a result of the herders-farmers clashes, very onerous cloud is gathering.

Soyinka also agreed that Nigeria is hurting like never before in its history.

He added: “We cannot all be mere idle alarmists and all at the same time.

“The nation is hurting. It’s hurting like none of us can recall in our lifetime.

“It’s a time for unprecedented approaches. The call for a national conference is not new; it is, however, taking on an accelerated urgency that no one should ignore.”

PRESIDENCY: WE’RE IN CONTROL OF SECURITY

PRESIDENCY: WE'RE IN CONTROL OF SECURITY