by Drum Africa
in Politics, Uncategorized
70
0 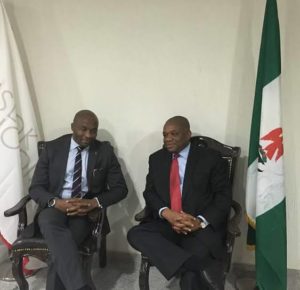 Today, Hon. Benjamin Okezie Kalu, the member representing Bende Federal Constituency and also the first House Member to move a motion in the 9th Assembly, felicitated with the senator representing Abia North, Sen. Orji Kalu on his emergence as the Chief Whip of the Red Chamber

One of the duties of the Chief Whip is to bring about decorum in the Senate. This according to Hon. Ben Kalu will be achieved by Senator Orji Kalu because so far,he has proved to be a man of high repute and dignity. He further states that these virtues will aid him in commanding the respect of fellow senators.
He stated that the choice of the Senate to adopt Sen Orji Kalu is one worthy of commendation because his experience in private and public sector will aid in adding to the feathers of the Senate.
In a publication made by the Federal House member, he made comments about the senator saying:

“Sen. Kalu is no doubt a square peg in a square hole.

This is a great day in Abia State, the South East region is feeling better than yesterday while hoping for more integration and I am happy to be representing him at the House of Representatives. This will sustain the good job he has been doing in Abia North .“

Hon. Benjamin Kalu said he was positive that in times to come, South East will be given more key positions, he further enjoined Abia North Constituents to be positive because a new Dawn has come.
He also congratulated Senator Enyinnaya Abaribe the minority leader of the Senate for making Abians proud. He encouraged all the principal officers from the state to forget political party colours and join hands with Governor Okezie Ikpeazu to make Abia State truly the first in development.