The House of Representatives have refuted the false claims made by the President of the Academic Staff Union of Universities Prof. Emmanuel Osodeke alleging that Speaker, Femi Gbajabiamila deceived the Union to suspend the strike action.

In a statement released to the Spokesperson of the House, Rep. Benjamin Kalu, he stated that the Speaker did not at any point commit to offsetting the arrears of the union members as alleged by the President of the Union.

HOUSE OF REPRESENTATIVES RESPONSE TO OSODEKE’S ALLEGATIONS OF DECEPTION AGAINST MR. SPEAKER

On Tuesday, 27th December 2022, the President of the Academic Staff Union of Universities (ASUU), Professor Emmanuel Osodeke, granted an interview accusing the Speaker of the House of Representatives, Rep Femi Gbajabiamila, of using deception to convince the union to call off its strike action.He specifically alleged that the Speaker failed to deliver on his written commitment that the government would, without delay, offset the arrears of salaries owed to members of the union for the time they were on strike.

For the record, at no point did the Speaker of the House of Representatives commit to offset the arrears of salaries owed to union members for the time they were on strike.The House of Representatives helped resolve the strike by making commitments to improve the welfare package of university lecturers and revitalisation funds to improve the infrastructure and operations of federal universities.These commitments are reflected in the 2023 Appropriation Bill, which includes one hundred and seventy billion naira (N170,000,000,000.00) to provide a level of increment in the welfare package of university lecturers and additional three hundred billion naira (N300,000,000,000.00) in revitalisation funds.

Furthermore, the House of Representatives continues to work with stakeholders; the Accountant General of the Federation (AGF) and the Academic Staff Union of Universities (ASUU) to facilitate the adoption of elements of the University Transparency and Accountability Solution (UTAS) into the Integrated Payroll and Personnel Information System (IPPIS).This effort is being supervised by the Chairman of the House Committee on Tertiary Education, Rep. Aminu Suleiman.

Professor Emmanuel Osodeke knows that the Federal Government of Nigeria is under no obligation to pay university lecturers’ salaries for the duration they were on strike.This is a settled matter in law.See S. 43(1)(a) Trade Disputes Act, Cap T8, Laws of the Federation of Nigeria (LFN).The Executive decision not to pay salaries to lecturers for the time spent on strike is warranted by the government’s legitimate interest in preventing moral hazard and discouraging disruptive industrial actions.Nonetheless, the Speaker has made interventions for an exemption in this regard, and Professor Osodeke is well aware of this.

The public interest in ensuring a well-functioning tertiary education sector is a matter of paramount concern for all who understand the transformational role of education in any society.For this reason, the 9th House of Representatives has been consistent in our efforts to explore avenues for reform and improvement to the framework of public education in the country from basic education through tertiary.Our objectives in this regard will not be achieved when stakeholders choose to ignore substantive issues and the consideration of bold ideas in favour of cheap blackmail and immoral propaganda.

Professor Osodeke’s bad-faith approach to negotiations and his affinity for political brinkmanship are significant reasons the universities were on strike for so long. His ongoing interventions continue to threaten the progress being made to preclude the possibility of further disruptions to the academic calendar of the universities.Therefore, I call on him, in his capacity as President of the Academic Staff Union of Universities (ASUU), to desist from making further misleading statements against the House of Representatives and the Speaker, Rep. Femi Gbajabiamila. There is no place for belligerence and selfish agitation in this critical moment.This is the time for calm heads and steady hands, working together for the common good. 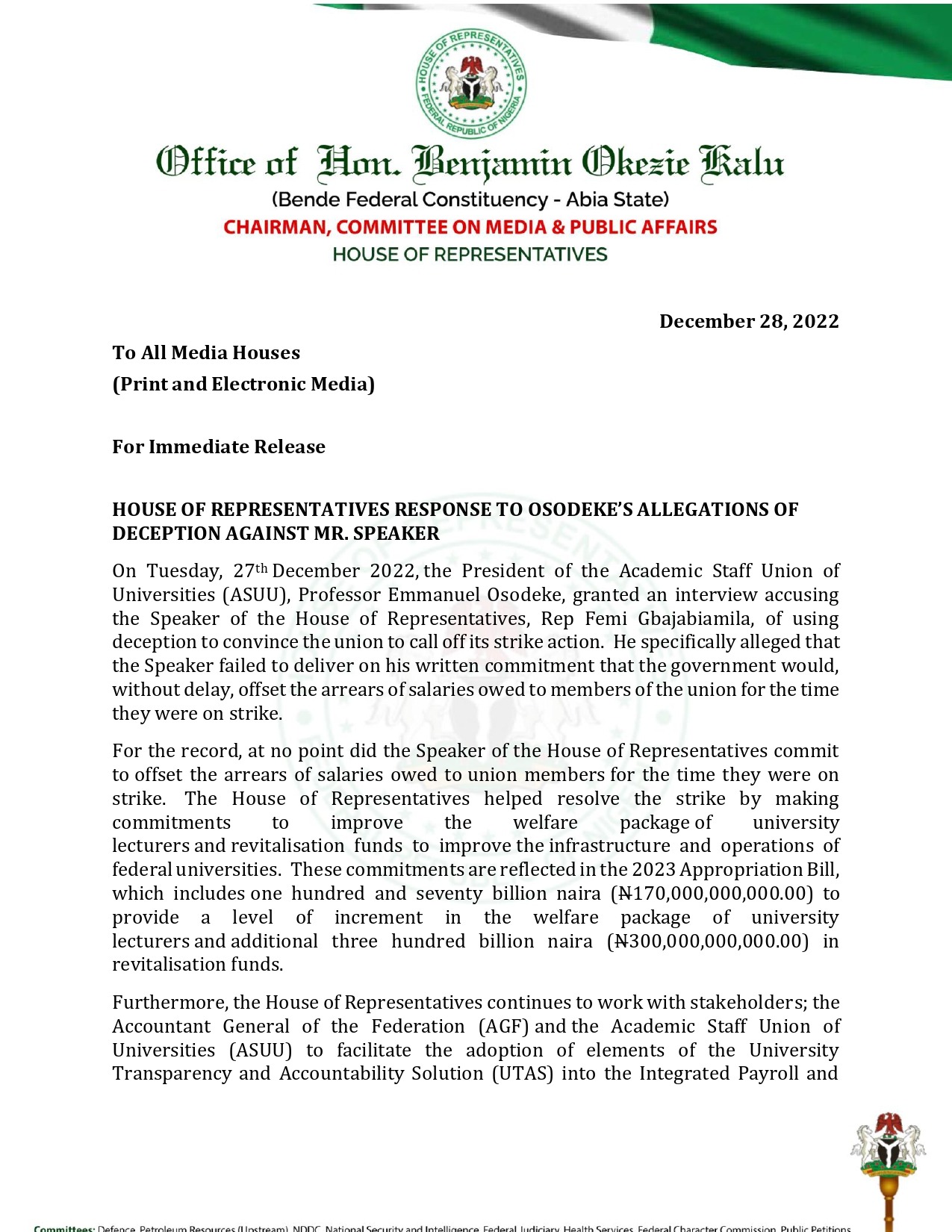 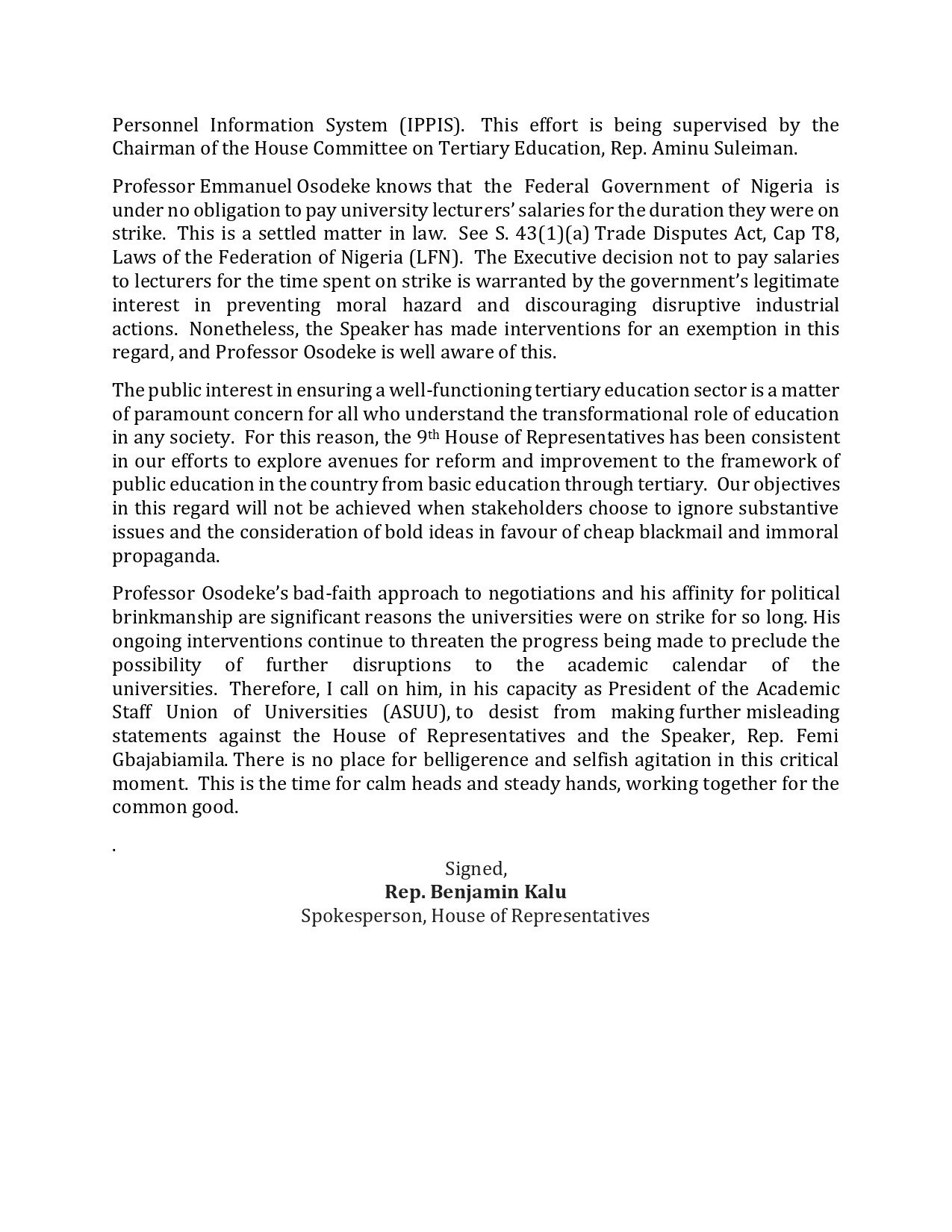