Hon. Kalu, spokesperson of the House of Representatives therefore demanded apology from Mr. Uwak within seven days, retraction of the libelous contents as well as deletion of all published defamatory contents online within seven days.

In a letter from his legal representative, Prof. Ernest Ojukwu, SAN of Ojukwu Faotu & Yusuf Chambers, the lawmaker also demanded that the apology letter be published in at least two national dailies and distributed to members of National Assembly.

Mr. Uwak had in the said libelous materials alleged that Benjamin Kalu is in an intimate relationship with his wife, Mrs. Kezia Robinson Uwak, an allegation the lawmaker has since denied.

Hon. Kalu stated that he knew Miss. Kezia Irek, as she was then known as one of those who worked for him between 2017 and 2019 during his preparation for 2019 election as a freelance photographer and graphic designer.

He further said, since the expiration of her contract in 2019, he has not seen Mrs. Uwak till she recently called to work for him ahead of the 2023 election.

The letter read in part,

“These allegations are false, and our client is at loss as to why you will intentionally set out to hurt his good name and reputation with such serious falsehood.

“For the records, our client never had and does not have any form of personal relationship with Mrs. Kezia Robinson Uwak. Between 2017 and 2019, Mrs. Uwak (then known as Miss. Kezia Irek) and other photographers worked as freelance photographers/graphic designers for our client’s 2019 election campaign team. All the interactions between our client and Mrs. Kezia Robinson Uwak (then known as Miss Irek) were official interactions, and the payments made to her were properly invoiced and documented. Mrs. Uwak’s work with our client’s campaign team concluded in 2019 before she met and/or married you. After the 2019 election campaign, our client has not seen or met Mrs. Uwak till date. Our client did not have any form of interaction/communication with Mrs. Kezia Robinson Uwak after 2019 until about three weeks ago when she contacted our client and sought to work for our client’s 2023 election campaign team. Our client did not have any available job for Mrs Uwak and no job offer was made to her.”

The lawmaker insists he is hurt that his enviable image built over time is being maligned by Mr. Robinson Uwak, insisting that he will seek legal redress upon his failure to apologise in seven days. 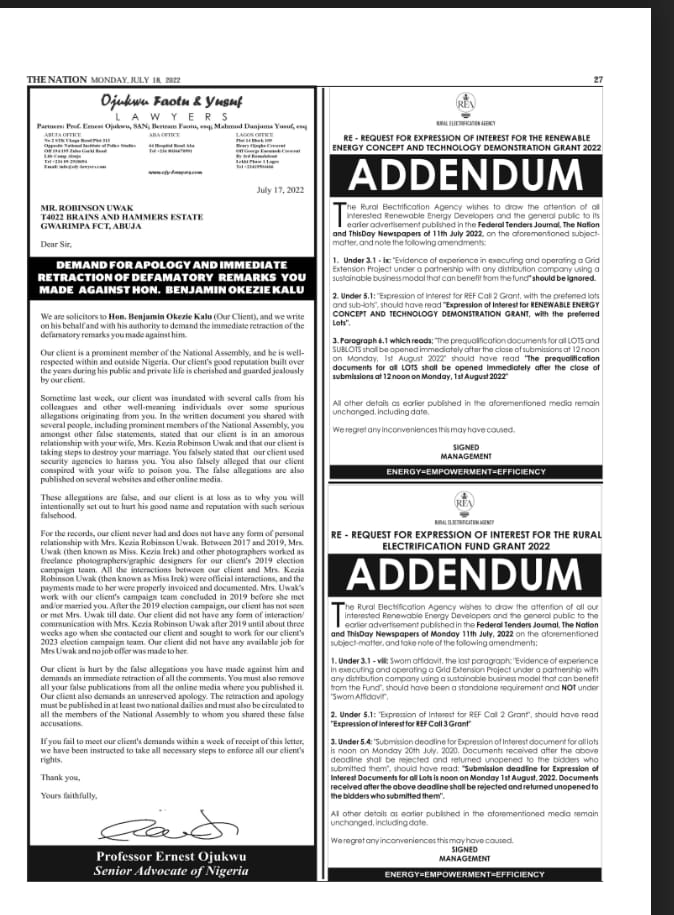 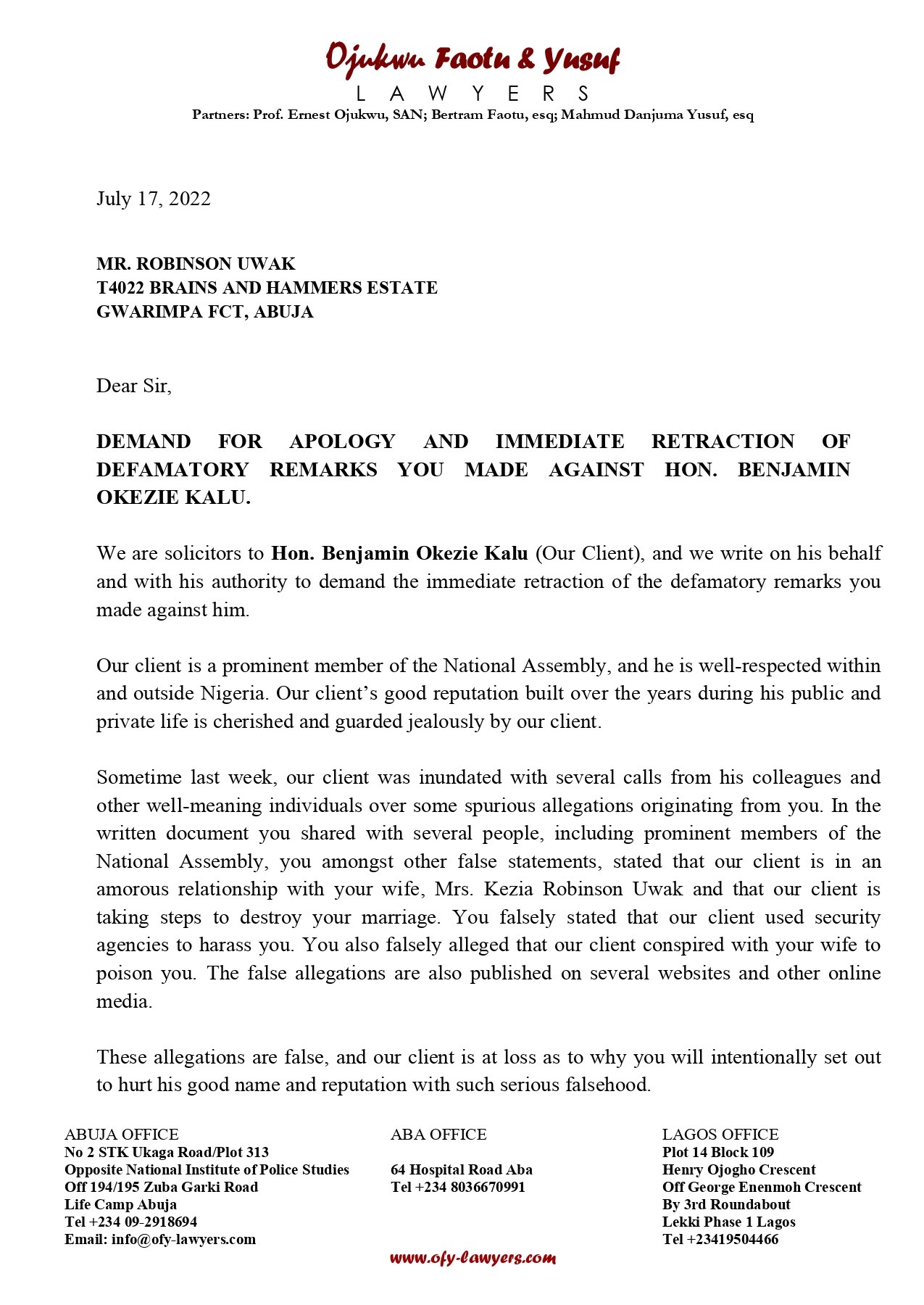 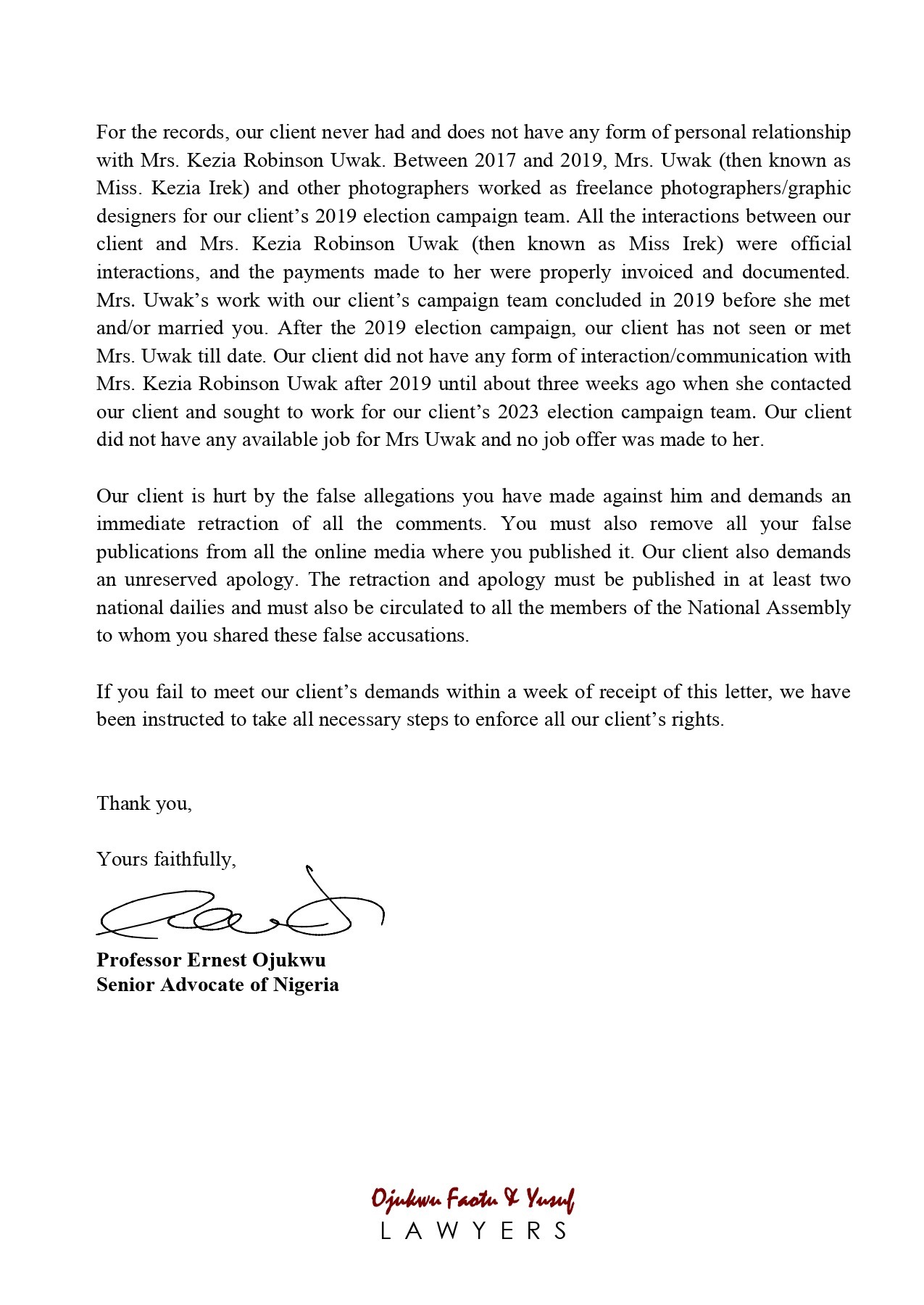 OPINION: Why must the ‘Righteous’ suffer: BEN KALU and the treachery from within – Amobi Onyemauwa Eke

Rep. Benjamin Kalu set to receive Democracy Heroes Award as Most Outstanding Member of the Year

Rep. Benjamin Kalu set to receive Democracy Heroes Award as Most Outstanding Member of the Year