The Spokesperson of the House of Representatives and Member representing Bende Federal Constituency has sent his felicitation to the Senate President Ahmed Lawan on the Chieftaincy title recently conferred on him in Aba, Abia State on the 11th of November, 2021.

The Senate President who was in Abia State for the commissioning of the Enyimba Automated Shoe Company in Aba was given the title ‘Onyentukwasi Obi 1 of Aba’ by His Imperial Majesty, Eze Isaac Ajuonu Ikonne, Enyi 1 of Aba at the venue of the reception.

In a release signed by the representative, he stated that the title is describing the Senate President as one who has led without any form of bias in tribe or colour. He expressed delight at the title coming from the southerners few days after he was turbaned in Kebbi.

He urged the Senate President to continue in his leadership style adding that this recognition comes with its responsibilities which includes fostering the inclusion of the south east and championing unity in the nation.

He prayed that this title brings him more peace and prosperity.

I heartily congratulate you on the chieftaincy title conferred on you by the Enyi 1 of Aba, HRH, Eze I. A. Ikonne as ‘Onyentukwasi Obi 1 of Aba’ in recognition of your exemplary leadership and outstanding service to Nigeria.

This is coming few days after you were conferred as the Ganuwan Kabi of Kebbi, by the Emir of Agungun alongside your long term friend, the Chief Whip of the Senate, Sen. Orji Uzor Kalu who was also turbaned as the Kibbiyan Kabi of Kebbi.

It was truly my desire that as a true nationalist who knows no tribe, Colour or religion that the southerners will also toe this path in recognition of your support. I am gladdened to see it come to reality in no time with this unique title ‘Onyentukwasi Obi 1 of Aba’ which means ‘The one we can trust’.

This title comes with its responsibilities, one of which includes promoting national agenda that will foster the inclusion of Ndi Igbo and the unity of the country.

Once again, on behalf of Bende Federal Constituency, We heartily congratulate you on this title and we pray it brings you peace and prosperity. 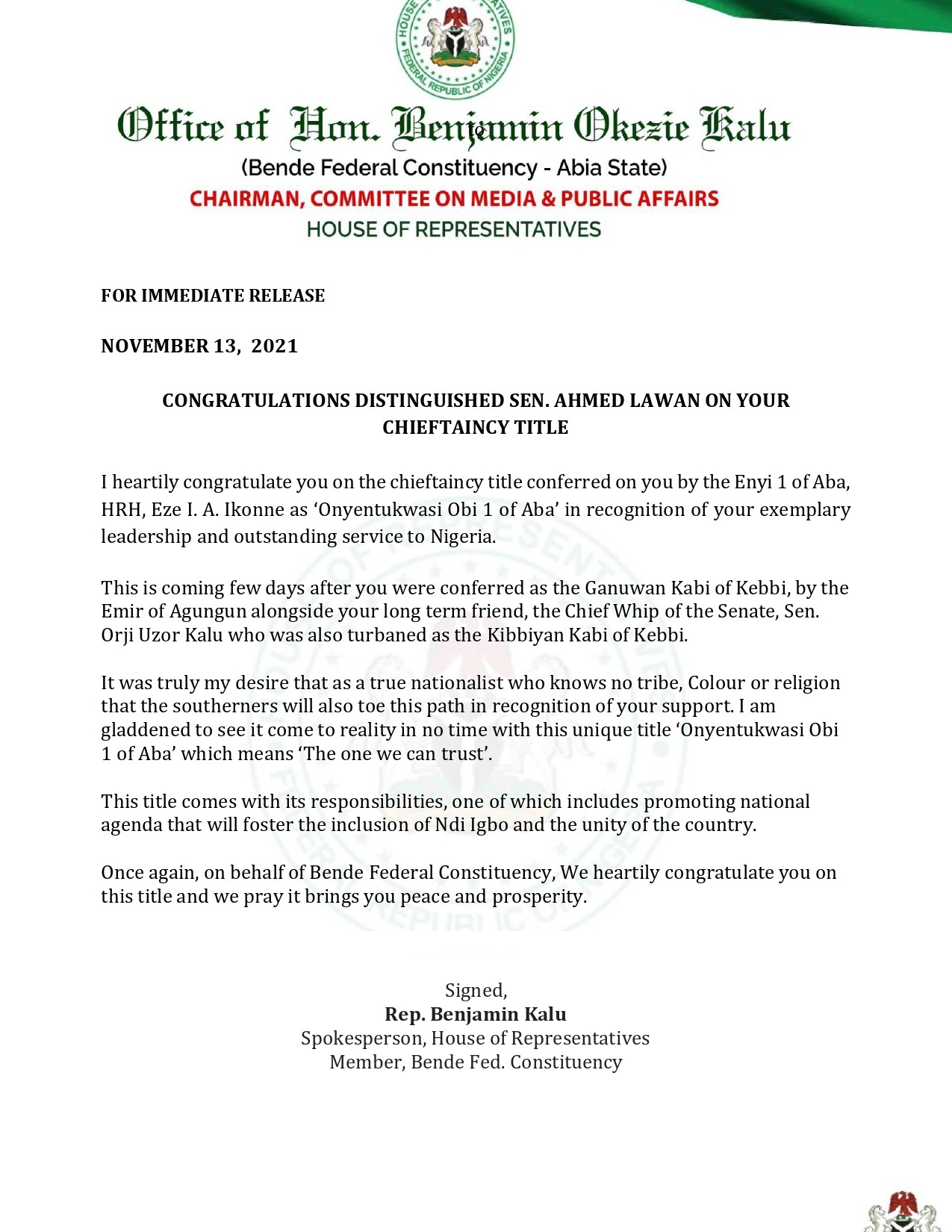