The Member representing Bende Federal Constituency and the Spokesperson of the House of Representatives, Rep. Benjamin Kalu has suggested that all hands must be on deck if we are to achieve a state we will be proud of.

The representative in a statement released today, August 27, 2021 while congratulating the state on this milestone age.

Describing the state as ‘a work in progress’ he stated that the journey of the state has not been such a smooth one as a result of many factors however, he suggested that this may be a good time to leverage on the capacity of individuals in the state as the government cannot do it alone.

He urged the Governor to bring stakeholders of the state together irrespective of party affiliations, past and present leaders as well as successful individuals from various sectors of the society to strategize on ways they can be part of development of the state.

He further encouraged the Governor to be steadfast in improving the lives of civil servants in the state as this is a major indication to how well a government has performed.

Acknowledging the efforts of the Government in the Made in Aba Campaign he encouraged Abia citizens of to support the movement by patronizing Made in Aba products stating that as a state, Abia is known production other than consumption

ABIA AT 30: A call for unity amongst stakeholders for the development of the State

It is with great delight that I congratulate all Abians in the state and in diaspora on this 30th anniversary. This is indeed a distinctive celebration as it calls for sober reflection on the journey so far.

Today, as a state we hit a major milestone marking the 30th year since the creation of the ‘God’s Own State’, one question stares in our faces, ‘How far have we come?’

The journey has not particularly been a smooth one for us as a result of factors that have inhibited our growth in several ways. However, it will be remiss to suggest that we have not made visible progress in the past years. Abia state has exceeded expectations in terms of education, industrialization and peace in the state; we can say that we are a work in progress.

At this point, it is imperative to state that the development of Abia is not a task for the government alone. I believe that the time has come for collective effort to move Abia state forward in every sector.

I urge the Government to reach out to the stakeholders of this state, leaders past and present, irrespective of party affiliations at various levels of government, as well as individuals who have successfully excelled in various sectors of the society to build synergy and strategize on the problems facing the state in the bid to proffer workable solutions that will ensure that we take forward steps of progress. This model has been explored by some states in Nigeria yeilding positive results that are evident in their output and productivity.

I also encourage the state government to pay close attention to the civil servants in the state as they are a strong factor in the success or failure of any government. In the same vein, I  encourage civil servants to justify the payments they receive by executing their roles and making significant impact in the various ministries and parastatals to which they belong.

I applaud His Excellency, the Executive Governor of Abia State, Dr. Okezie Ikpeazu, on his commitment to the Made in Aba Campaign and his ability to harness and nurture the capacity of resources in the state. Aba, fondly referred to as the ‘Japan of Africa’, has always been known as the commercial hub of Africa for its creativity in production of goods ranging from textiles to footwear. I urge all Abians to support this movement by patronizing the Made in Aba products.

Once again, on behalf of Bende Federal Constituency, I congratulate all Abians on this 30th Anniversary and I wish the leadership of the state the best as we make efforts for her growth and development. 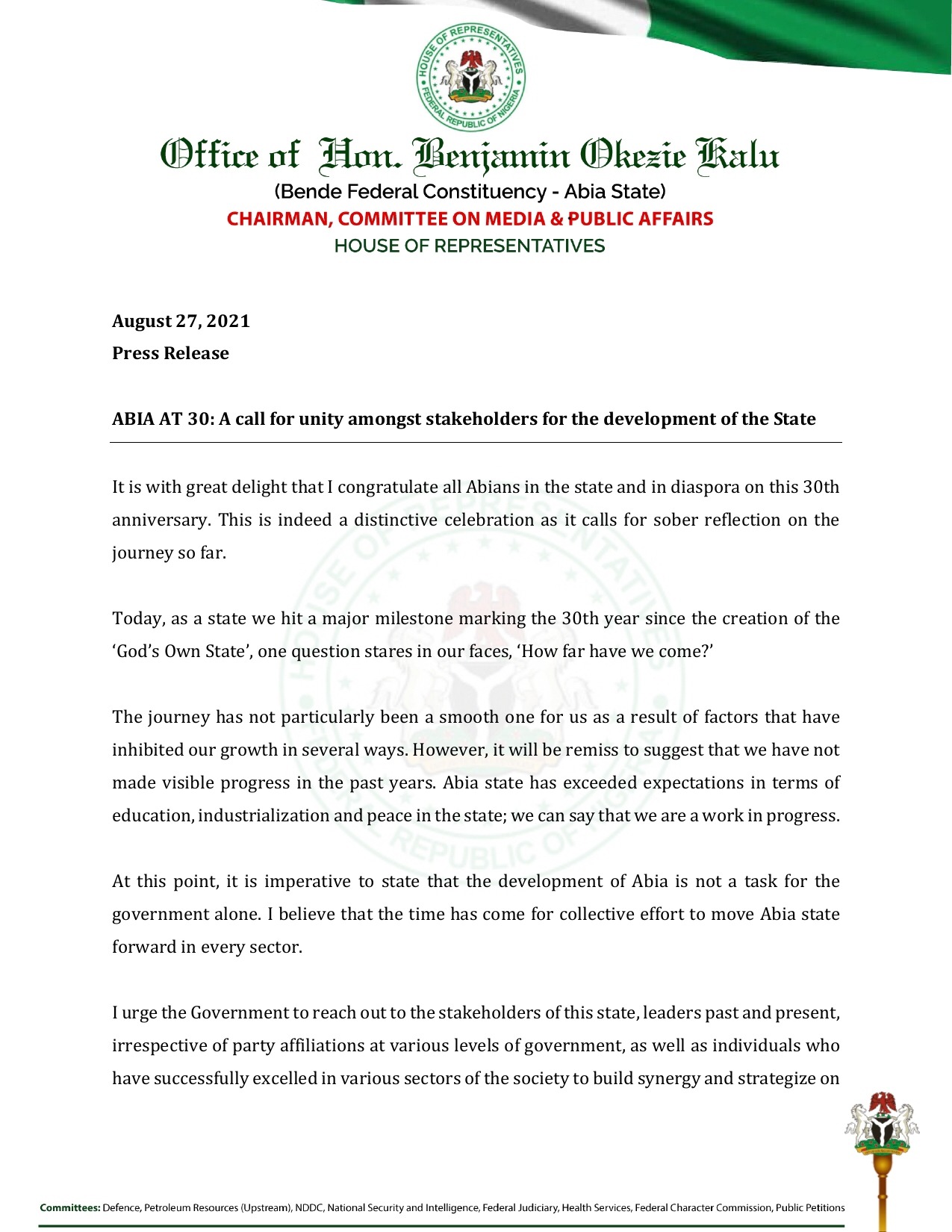 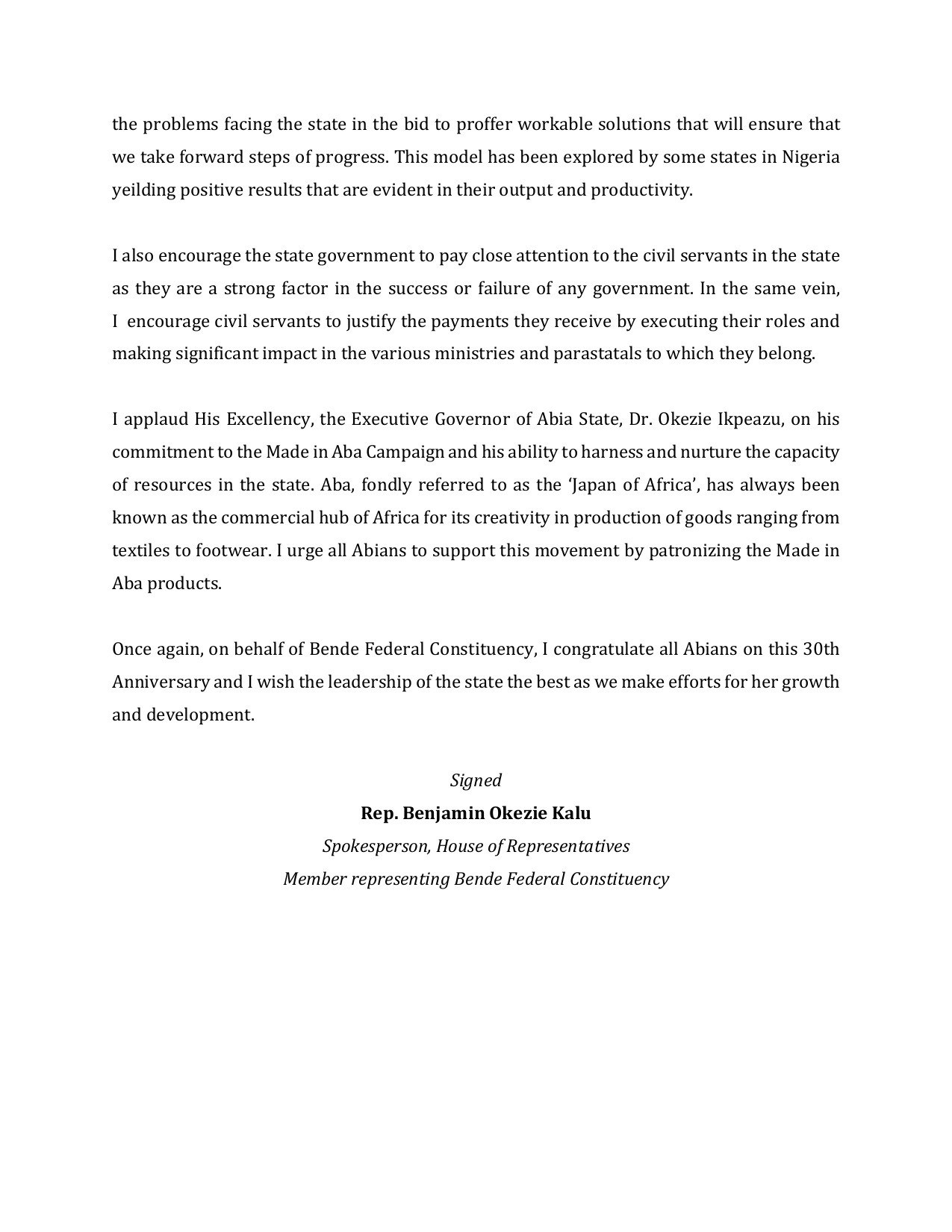