by Drum Africa News
in Uncategorized
60
0

The National Action Against Terrorism (NAAT) has warned the House minority leader, Hon. Ndudi Elumeu, against politicizing the calls for the sack or resignation of Pantami. NAAT warns that Hon. Elumelu desire for publicity has driven him away from the core content of the call for Pantami’s resignation.

The group alleged that after the Speaker of the House properly guided the minority leader who erroneously presented the issue of Pantami’s resignation under the wrong Order of the House Rules, Hon. Elumelu has shown reluctance to properly represent his call for Pantami’s resignation as a motion but has instead chosen to orchestrate a smear campaign against House Spokesperson, Hon. Benjamin Kalu, in a bid to seek publicity.

Read the statement below;

Speaker and the Spokesperson were right, Minority leader was wrong.

Our organisation whose aim has been to monitor issues and events around any form of terrorism in Nigeria and the neighbouring countries, having monitored the trending legitimate demand for the sack of Pantami, the Hon. Minister of communication and digital economy because the citizens have lost confidence in his credibility to handle such sensitive office, met and deliberated on various matters arising from the current events especially as it affects the House of Representatives.

Our legal team made up of past members of parliament and legal luminaries have watched the proceedings of plenary on the day of the event of the presentation of the point of order as raised by the minority leader Hon. Ndudi Elumelu with specific consideration of the details of the Order 6 of the House, the specifics of his call as a matter covered under privileges, the televised  response of the speaker, the point of order raised the following day by Hon. Jaha Babao with the contribution of the minority caucus represented by Hon Abonta Nkem on the same issue, the resolution of the House on it, the subsequent press release on it by the spokesperson of the House, the response by Hon. Francis Agbo of the minority Caucus and the counter reply by the Spokesperson of the house.

a. It was obvious that the point of order 6 relied upon was wrong and does not cover issues raised by the minority leader Hon. Ndudi Elumelu. Please read the details of the order 6(1) (3) in conjunction with the House Powers and privileges Act 2017.

b. It was mentioned by the speaker Rt. Hon. Femi Gbajabiamila (not Hon. Benjamin Kalu) on a live TV coverage, that Hon. Elumelu came under the wrong order, thereby constraining the Speaker to only note his presentation until it is properly presented to which Hon. Elumelu raised no further objection.

c. Elumelu failed to use the window of coming via a motion for a debate on the following day to remedy the faulty presentation of the previous day. Rather, he enjoyed the misrepresentation of facts in the media claiming that his motion was shut down, when he was yet to bring a motion. He made no effort to correct the wrong narratives in the press as expected from a principal officer of the House. This was while the Speaker was erroneously bashed by the public for attempting to guide him accurately.

d. These wrong narratives created room for Hon Jaha to come under privilege for clarification of the House that no motion was shut down, which was so clarified without an objection. Instead Hon. Nkem Abonta an experienced member asked the minority leader to come via a motion to avoid the ridiculing of the House by the public.

e. A formal press release was made by the Spokesman assuring Nigerians in clear terms, without ambiguities, that the Speaker did not act on a frolic of his own but in line with the House rules. The Spokesperson of the minority caucus rejected this press release, demanding an apology from the House Spokesperson, who in turn, rejected the demand.

f. Our intelligence gathered; a certain group was paid to drag the name of the Spokesperson of the House for doing his job as the mouth piece of the House.

Arising from the emergency meeting called this morning to mitigate the attempt by Hon. Ndudi Elumelu to derail the objective of the calls for the sack or suspension of Pantami, our resolutions are as follows; 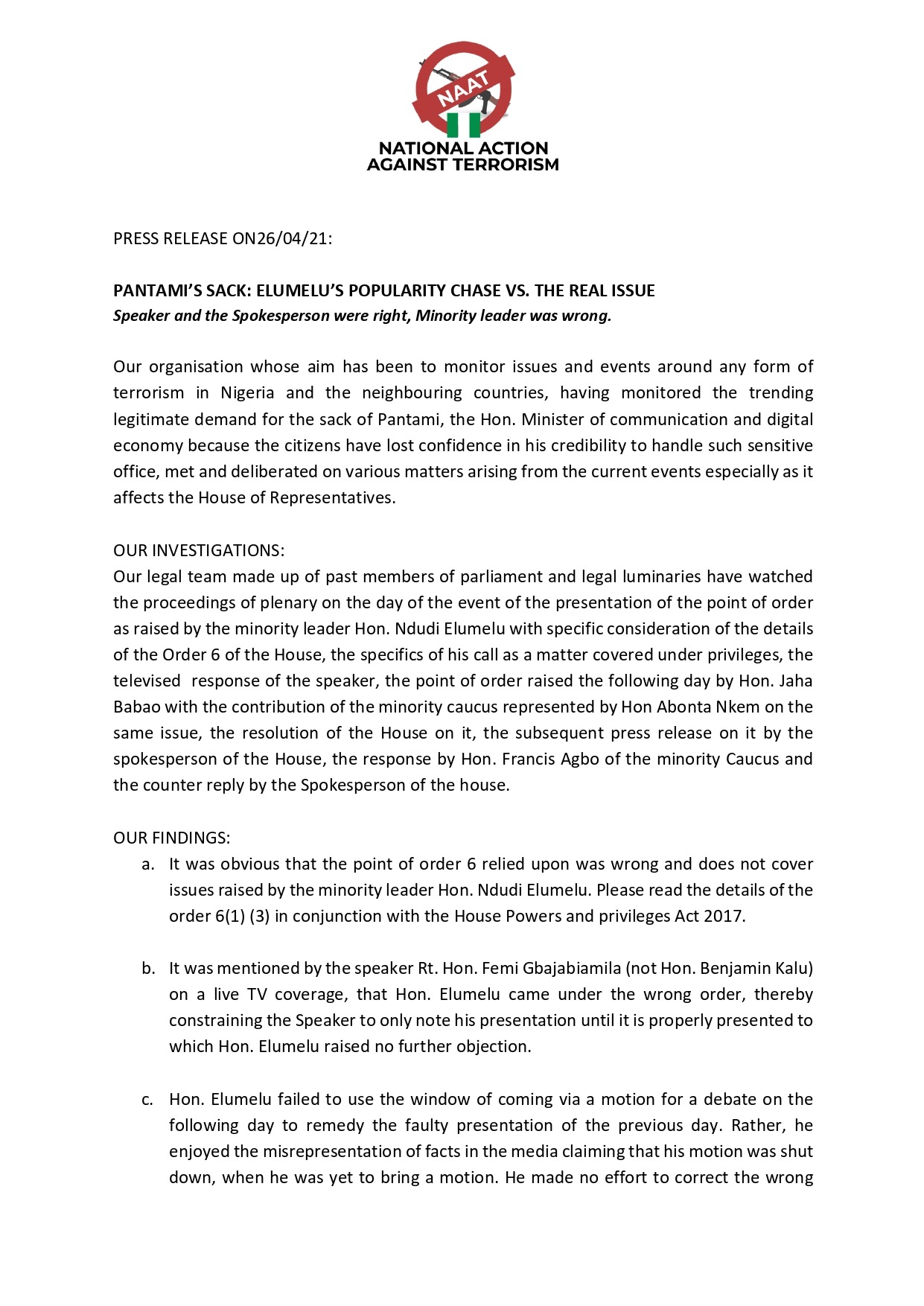 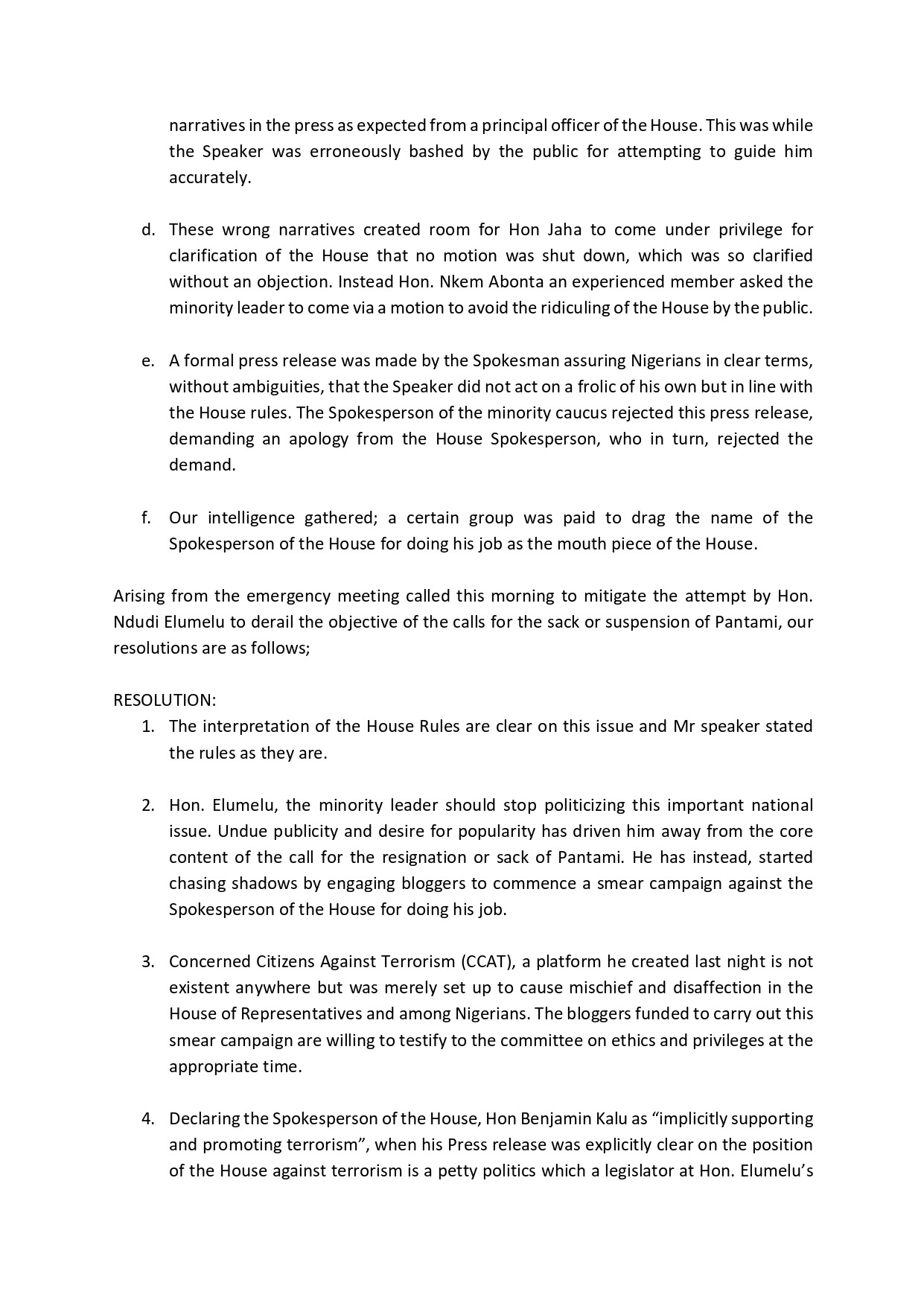 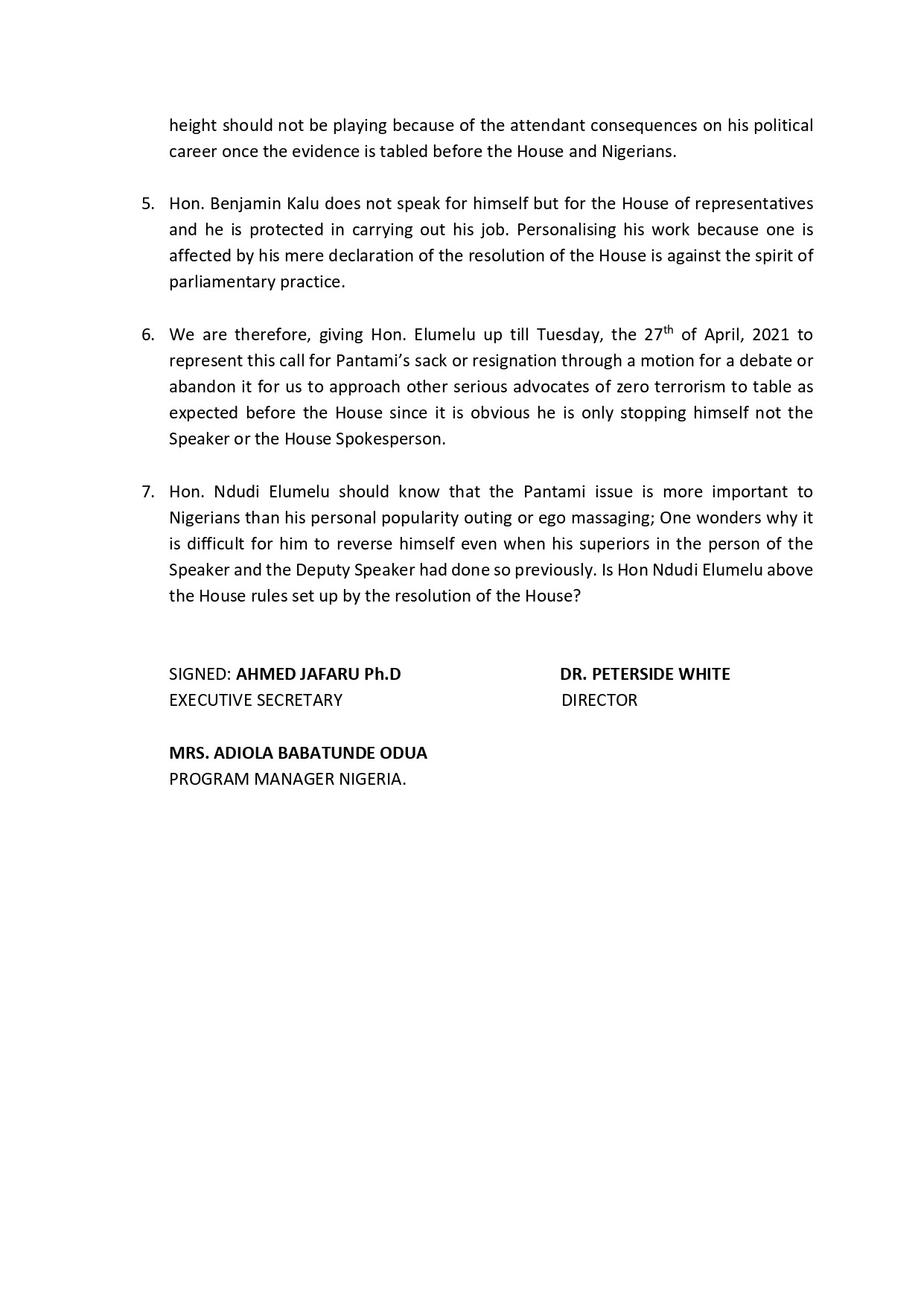