The people of Igwebuike ward 4 in Aba South Constituency were in high jubilation as they welcomed the presence of the Sen. Orji Kalu, the Hon. Benjamin Kalu, Chief Emeka Wogu, Chief Uche Maduako and other APC leaders to a reception organized by the ward for OUK.

Chief Emeka Wogu speaking at the event highlighted various accomplishments of Sen. Orji Uzor Kalu while he was the Governor. Speaking on the forth coming elections in the Aba North and South Federal Constituency, he encouraged the community members that the right person with the character and competence to replace the late Honorable Ossy Presige is Hon. Mascot Uzor Kalu. In his words,

He encouraged the community to ensure that they vote APC on the 27th of March, 2021

The APC party Secretary of the state, Mr. Perfect Okorie in the ward’s ability to deliver Hon. Mascot Uzor Kalu.

Hon. Benjamin Kalu who was widely received by the  community with songs and celebrations informed them that Sen. Kalu has already confirmed that the road leading to the ward which is in a horrible state will be included as a project to be executed in the state. This project will be attracted and handled by Hon. Mascot Uzor Kalu.

He added that no Senator has attracted projects as much as Sen. Orji Uzor Kalu at the National Assembly and with the addition of Mascot Uzor Kalu, the team work will be strengthened to ensure maximum productivity. He mentioned that it is important for the community to vote someone who they could hold by the hand to point out projects especially the ones that had already commissioned by the late Honorable member, Ossy Prestige.

Chief Uche Maduako also speaking at the gathering, mentioned that the National Assembly is not a place for amateurs. He emphasized that as a former member, anyone who goes there without having a person to lead him will surely be lost.

The Chief Whip of the Senate, Sen. Orji Kalu who began with songs of worship to God, asked the community when last tractors repaired  the streets or salaries paid on time or free education enjoyed  by the children. The community answered in agreement that this only happened at the time when he was the governor.

He reminded them that if they really crave the development they deserve, APC is the party to vote in the forth coming elections.

He mentioned that Ngwa, Ohanku and Obohia road is being built by the World Bank and not the Abia State Government as is being rumored.

He expressed sadness and regret as what the government has become since he left the state house.

He mentioned that the Senator representing Abia South, Sen. Enyinnaya Abaribe has been there for 16 years with nothing to show for his time in office. He remarked that this is factually a different situation in Abia North and that is why he has come himself to let the people of Aba experience this development.

He concluded by expressing his confidence that the people of Aba should not be deceived by anybody who wants to get their votes but  will not deliver on the job. 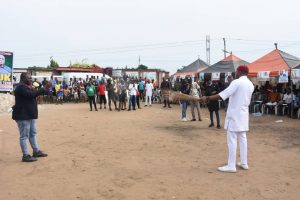 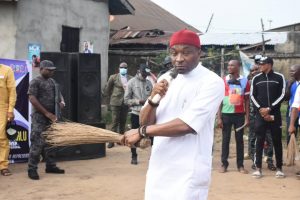 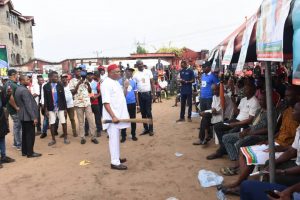 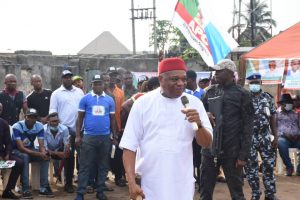 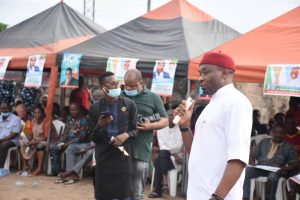 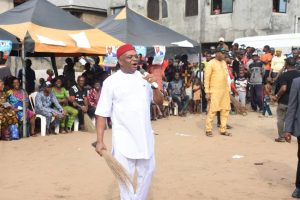 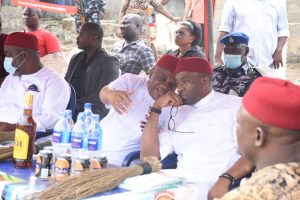 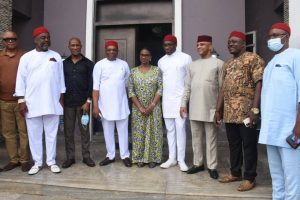