It was an eventful day as the leaders and members of the All Progressive Congress in Abia State Converged at the residence of Hon. Emeka Wogu to discuss the forthcoming Abia North and South Federal Constituency election set to hold on the 27th of March 2021.

After the opening prayer led by the Deputy Chief Whip of the House of Representatives Hon. Nkeiru Onyejeocha, the State Chairman of the party Chief Donatus Nwankpa began with an opening address.

In his opening speech, he introduced the newest members of the party including Hon. Blessing Nwagba, Hon Uche Maduako and others.

He went ahead to inform the party that the party has selected a credible and competent leader who is fortified with all the needed qualifications to represent the party and Aba at the House of Representatives.

He introduced the Candidate Hon. Mascot Uzor Kalu to the candidate was flagged by the leaders of the party in agreement to this choice pledging support and commitment to the victory.

In response the Candidate Hon. Mascot Uzor Kalu appreciated the support from the party and emphasized that this election will be won in the state.

He highlighted that this election is a fight to show that the party has the ability and capacity to win the elections by 2023.

He urged the party to come out, not just to support him but to put their footprints on the sands of time and show the day APC took Aba.

He appreciated everyone present for this huge support with a promise that they will not have any reason to regret supporting him.

The Hon. Minister of Mines and Steel, Dr Uche Ogah, in his speech told the party that there is nothing like the strength of Unity. He urged everyone that everyone must come out to ensure that APC wins the election. He announced that the APC mega rally will hold on Thursday 25th of March 2021.

He expressed sadness on the painful state of the roads in the State, adding that APC is here to bring a new story.

The deputy chief speaking, informed the party that this election for the women is serious business and there’s no joke about it. She highlighted that if she is performing and her Senator is performing that it is because of her party APC.

“I am performing because my Senator and I are a formidable team. If the Aba people like good things, they should vote APC”

The Spokesperson of the House Hon. Ben Kalu In His speech mentioned that the time for Aba to become APC.

“The late Hon Member, Hon. Ossy Prestige met all of us and told us that he wanted to join the party APC, and the real Ahamefula is that APC should take over Aba”

He encouraged the party that the real desires of the late Honourable is that APC replaces him at the green chambers.

Chief Emeka Wogu, the host appreciated everyone who attended the meeting, he recalled that in 1999 when he won the election and the victory was denied him bu the leaders of Aba la Ohazu.

“The party has decided, discussions have ended and actions have begun “

Hon. Sam Onuigbo, while speaking mentioned that as earlier said by other leaders in the party, this election is not about Hon. Mascot.

He warned that no one should undermine the party because they have any issues emphasizing the it will only be self sabotage.

Hon. Nkechi Nwaogu in addition to all that has been said, highlighting that she is very proud of the party APC. She insisted that Abia must be redeemed from the bad governance of PDP.

“You can’t send a mediocre to the National Assembly, if you want to send people to the, send your best hands or they will be servants to the committees”

Using instances like the Chief Whip of the Senate and the Spokesperson of the House of Representatives.

The meeting ended with announcements and closing prayers. 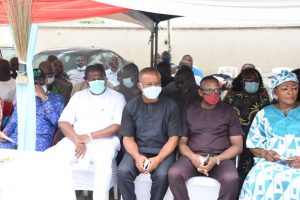 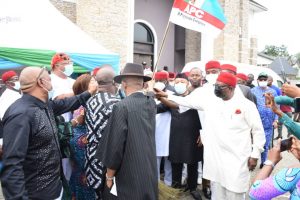 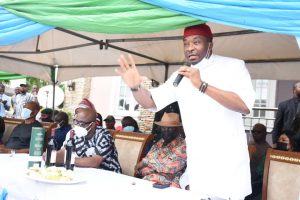 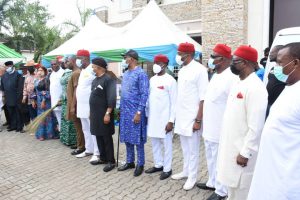 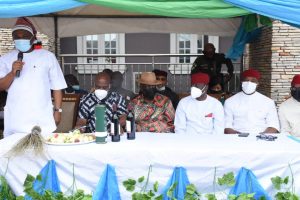