by Drum Africa Correspondent
in National
57
0

The House has commiserated with the Nigerian Army, and families of other officers who were on board the air craft conveying the Chief of Army Staff to  Kaduna on Friday, the 21st of May, 2021.

The House made this statement in a press release by the Spokesperson, Rep. Benjamin Kalu today May 23rd, 2021.

He stated that the House commiserates with the Nigerian Army and the families of the other officers who were involved in the crash, praying that the almighty God grants them eternal rest.

He also urged the Nigerian Army to remain strong and undefeated regardless of this incident in the fight for the security of the nation.

House of Representatives commiserates with the Nigerian Army over the unfortunate demise of the Chief of Army Staff, Lt.-Gen. Ibrahim Attahiru and other Army officers.

The House of Representatives received with shock and sadness the news of the sudden death of the Chief of Army Staff, Lt.-Gen. Ibrahim Attahiru, which occurred in an air crash in Kaduna on Friday, 21st of May 2021 withsix other Army officers.

Lt.-Gen. Attahiru was a patriotic officer, who was committed to improving the security of the country, especially in the war against insurgency.

During his short stay in office as the Chief of Army Staff, the late Attahiru showed great commitment in his plan to defeat Boko Haram and bring under control, other security threats, which the country faced in recent times.

The House hereby commiserates with the Nigerian Army, his immediate family Federal Government over this unfortunate incident, and prays that the Almighty God will grant his soul and the souls of the other officers, who died in the ill-fated aircraft, eternal rest.

The House urges the hierarchy of the Nigerian Army to remain strong and focused regardless of this sad incident to the task of safeguarding the security of the nation. 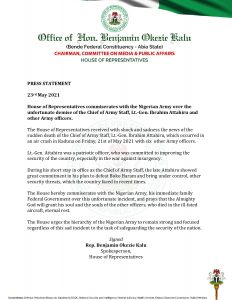 Prof. Victor Ukaogo: Rain of Awards for a Cerebral Scholar and Humanist